All eyes on Russia in first Eurovision semi-final 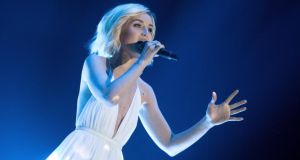 All eyes and ears will be on the Russian entry in Tuesday night’s first semi-final of the 2015 Eurovision Song Contest.

After last year’s Russian act was booed loudly during the 2014 final in Copenhagen, there is much speculation among Eurovision fans and media as to whether this year’s singer, Polina Gagarina, will receive the same treatment when she sings the power ballad A Million Voices tonight.

It is widely understood that the booing last year was an expression of disapproval of Russia’s foreign policy and its 2013 law against the distribution of gay “propaganda” to minors.

Given Russian aggression against its neighbours continues – indeed Ukraine chose not to compete in Eurovision this year because of the conflict with Russia – another dose of disapproval would seem likely.

A Million Voices has emerged, however, as a strong favourite to place well in the contest: it has surged to fifth place in the betting polls since rehearsals began a week ago in response to Gagarina’s powerful vocals and the act’s evocative staging. Gagarina sings 12th in tonight’s lineup.

Viewers will want to make sure to be in front of their screens from the first moments of Tuesday night’s show for an opening sequence that combines a notable nod to Eurovision tradition with a more contemporary emphasis on audience engagement.

Last year’s winner Conchita Wurst figures significantly in the broadcast, not just by singing the traditional reprise of her winning song Rise like a Phoenix but as hostess in the contest green room.

Other hotly-tipped acts tonight include Estonia’s Stig Rasta and Elina Born with their moody, well-staged duet Goodbye to Yesterday, (fourth in the overall betting odds), and Finland’s ground-breaking entry Aina Mun Pitaa (“I Always Have To”) by the punk band PKN, made up of four middle-aged men with intellectual disabilities (seventh in the odds).

Disability awareness and visibility is emerging as a theme in this year’s competition: the Polish singer Monika Kuszynska who sings in Thursday’s semi-final, is partially paralyzed and uses a wheelchair; and the Austrian broadcaster ORF will, for the first time in the contest’s history, present it in international sign language, accessed via eurovision.tv or tvthek.orf.at.

Ireland’s 2015 competition Molly Sterling will perform second in Thursday’s semi-final. On Sunday night she and the rest of the Irish delegation attended the Contest’s gala opening ceremonies at Vienna City Hall, where she rubbed shoulders with some of the competition, including the current betmakers’ favourite, Mans Zemerlow from Sweden, and the Italian pop opera trio Il Vole, currently second in betmakers’ polls.