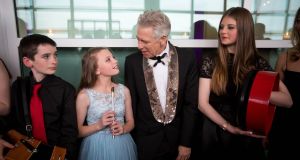 U2 bass guitarist Adam Clayton paid tribute to music superstar Prince, calling him “an extraordinary talent” who represented the beginning of a “new America” on the pop scene.

Speaking on the fringes of an Irish-American event in New York City, the Irish musician told The Irish Times that U2 met Prince many times and that the American star’s run of hit singles in the 1980s and early 1990s - coinciding with the Dublin band rise to global stardom - “made us green with envy.”

“That didn’t exist and from him and MTV forward, the whole music scene and cultural scene in America shifted, and I think that’s why, particularly in America, Prince’s passing is considered such a cataclysmic event.”

Wearing a sparkling tuxedo and feather bow tie that might not have seemed out of place in Prince’s wardrobe, Mr Clayton broke away from recording with the band to be the guest of honour at the 41st annual New York gala of the philanthropic group, the American Ireland Fund, last night to promote Music Generation, a U2-backed programme bringing music education to young Irish people .

Kieran McLoughlin, chief executive of the American Ireland Fund, announced the gift of $1 million (€880,000) by the Stavros Niarchos Foundation, the charitable foundation run by the family of the late Greek shipping magnate to the Irish music teaching programme.

Established in 2010 with a $10 million (€8.7 million) gift from U2 and the American Ireland Fund’s global parent, The Ireland Funds, Music Generation has taught music to 35,000 Irish children and young people, and created 350 job opportunities, mostly for music teachers, and 51,000 hours of tuition in 12 parts of Ireland.

“Forty years ago when we got together as a band, our ambitions were predictable and simple: we just wanted to be the biggest band in the world,” Mr Clayton told about 1,000 guests at the Chelsea Piers on the west side of Manhattan.

“Forty years on, that seems like an innocent conceit. It did give us a healthy respect for how music can change lives and it is a rewarding irony that the success of Music Generation has been more fulfilling than any other achievement.”

The U2 musician extolled the benefits that playing music can bring to young people in terms of intellectual development, self-expression and self-belief.

“That is why we believe that Music Generation is more than a cultural project - it is a social movement too,” he said.

Since 2015, a further $3.5 million is being invested to bring the programme to another nine parts of Ireland and, Mr Clayton explained, the goal was to make it national by 2020.

To show off the fruits of the programme, he introduced a traditional Irish music group from Co Laois - Sarah Bennett (15), Conall Ó Cnáimhín (14), Fiadh Fitzpatrick (13) and their teacher Zoe Conway - who delighted guests with a rousing performance.

The New York gala dinner, the largest of more than 150 events held around the world by The Ireland Funds, raised $2.7 million to support hundreds of Irish charities and causes.

Mr McLoughlin told guests that Promising Ireland campaign, set up by The Ireland Funds in 2009 to assist Irish charities during the financial crisis, had twice exceeded its goals, raising $226 million over the past six years.

“That is an impressive number but here’s a slightly more sobering number. Despite that, we still have to turn down eight out of every 10 applications for support we receive in Ireland,” he said, telling guests that their support remained important today.

Mr Clayton described to guests how Music Generation was a “model philanthropic project” noting how every philanthropic dollar invested throws off a benefit of seven.

Asked if the programme could spawn another band like U2, he told The Irish Times that what was important was that people who came to music early through teaching could have a different kind of life.

“I don’t know whether everyone can be a U2, but it changed our lives and I think it’s going to change other people’s lives,” he said.

He acknowledged that the programme had it existed may not have helped when U2 started out.

“We were lucky in that we came up in a time of punk rock which said, you didn’t have to be able to play, so that suited us fine,” he said, smiling.