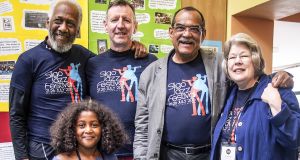 Eddie Lee remembers the moment when the improbable success that is the Sligo Jazz Project really took root. The former bass guitarist with melodic 1980s songsters Those Nervous Animals had left behind whatever dreams he had of pop stardom and was back in his beloved Sligo, putting in the hard hours to teach himself the double bass.

One day, he was working from an instructional video by US jazz legend Rufus Reid and noticed an email address for booking enquiries at the end. Impulsively, and with little expectation of success, Lee decided to invite the great bassist – a colossus of the instrument who had played with giants of jazz such as Dexter Gordon and Art Farmer – to come and teach in Sligo.

“I wrote: ‘Dear Rufus, I know this is a long shot, but a silent priest never got a parish,’” says Lee, laughing.

It was a year earlier, in 2005, that the seeds of the Sligo Jazz Project had been sown when Lee and a few friends organised a weekend course to further their own jazz educations. It had gone well enough that the idea of an official, week-long summer school dedicated to the teaching of jazz began to form in Lee’s mind, but he never expected to attract a tutor of the stature of Reid. To his surprise, the Chicago-born bassist replied immediately.

“He wrote, ‘Dear Eddie, just as well you’re not a silent priest – because I am available,’ and within two days we had him booked,” says Lee. “The rest is history, really. That just took everything to another level – the sudden realisation that you’ve got Rufus Reid coming to Sligo to teach.” Lee laughs at the memory. “Suddenly you think, holy shit, we must mean business!”

Since then, the Sligo Jazz Project has steadily grown into one of Europe’s biggest – and friendliest – jazz summer schools, attracting students from all over the world to study with an illustrious faculty of jazz stars in the shadow of Ben Bulben. Lee expects some 130 students, ranging in age from eight to 80, to descend on Sligo for this year’s summer school.

Jazz has been on Lee’s radar since his mid-teens. The Sligo of his youth was, he says, a hive of musical activity; but, while most of his contemporaries were listening to rock, Lee’s tastes were more eclectic, thanks in part to his friend Carl Smith’s jazz record collection.

“The first proper gig I was ever at was actually Oscar Peterson, ” says Lee. “Carl and I went up to Dublin on the train and saw Louis Stewart in the Baggot Inn, and Oscar Peterson at the RDS. I can’t remember who it was on bass, which is terrible, because I turned out to be a bass player, but [drummer] Louie Bellson blew my mind. I had never seen anybody doing that live. I was 15.”

If the bass was in Lee’s stars, it took him a while to actually acquire an instrument.

“I actually remember doing a gig in the regional college at the time on four strings of a guitar, and just playing bass lines on it, with Barry Brennan and Pádraig Meehan,” says Lee. “Inchoate would be to put it mildly,” he adds drily.

Meehan, Brennan and Lee would go on to form the core of Those Nervous Animals, a band that briefly held down the “next big thing” slot in Irish popular music. Their song The Business Enterprise (My Friend John) was everywhere in 1984, and the band performed at the star-studded Self-Aid benefit in 1986.

“We had the usual record companies dancing around us,” recalls Lee. “The guy from CBS who signed Prefab Sprout liked us, so we thought we must be brilliant. That’s the way we were thinking. CBS actually flew us over to London and we had a very interesting day with them – it was the first time I had Indian food.

“But at the same time, we were getting advice from U2’s lawyers and they said, you know, the usual shite, ‘hold off and we’ll find a better deal for you.’ We thought it was like all our birthdays had come at once, but we took the lawyers’ advice.”

While the band held off, the CBS offer expired, offers from other labels proved harder to hook, and Those Nervous Animals went the way of so many Irish bands swept along in U2’s wake.

“We were just too green,” says Lee without bitterness. “Some people would have over-ridden the lawyers’ advice and said, ‘bite that flippin’ hand off quick!’ But I think we just waited too long. So we never actually got into a studio to record an album. I think if we had, we would have done something good.”

Instead, Lee became a session bassist on the Dublin scene, recording with a pre-fame Enya, playing live with Stockton’s Wing, touring with the A Woman’s Heart project, and cutting loose with the brilliantly experimental Nine Wassies from Bainne, which Lee describes as “like Captain Beefheart had grown up in west Cork”.

And the more he played, the more he became determined to improve his technique, which eventually led him back to jazz.

“When I got a gig with Stockton’s Wing,” he remembers, “I was given a tape. I had a week and a half to learn the stuff, and [bassist] Tony Molloy’s playing frightened the life out of me. So I made myself a vow there and then that I would work my arse off to try to get better technique so I could play the stuff properly.”

Nowadays, as well as co-leading folk ensemble No Crows, Lee heads up a jazz education event that his younger self could only have dreamt about. To see him in the thick of it – welcoming students, introducing workshops, organising jam sessions, doing the thousand little things that make a summer school work – is to see a musician who has found his place in the world. Now 14 years old, the Sligo Jazz Project is able to bring together a faculty of tutors that Lee couldn’t have imagined when he sent that first email to Rufus Reid.

“We’ve kind of got a dream team assembled now,” admits Lee, namechecking some of the project’s regular faculty, including UK singer Liane Carroll, Sligo-born guitarist Mike Nielsen, British pianist and arranger Malcolm Edmonstone and US bassist John Goldsby. “They’re all fantastic people, people with great charisma, and we’ve also put together a brilliant team of volunteers to help with the organisation.”

The sense of community between teachers and students is palpable, and it’s clear that Lee is proud of the warm, welcoming atmosphere of the summer school where there is space for musicians to learn and grow, whatever their age or their level of proficiency. “You can really feel it on day one, when we introduce the teachers to the students,” he says of the special Sligo Jazz Project vibe, “and by the time you get to the weekend, it’s just one big love-fest, really.”

The Sligo Jazz Project and Festival 2019: seven stars to catch

Each year, the Sligo Jazz Project presents six days of workshops, masterclasses, jam sessions and concerts. By day, international jazz stars mix easily with students in the summer school; by night, the tutors take to the stage and one of Europe’s friendliest jazz festivals bursts on to the streets of Sligo. Stars to watch out for this year include:

Michael Pipoquinha Since he started posting videos of himself at the age of 13, the astonishing Brazilian virtuoso bassist has had other bassists’ jaws dropping and tongues wagging around the world.

Jean Toussaint The Caribbean-born saxophonist was a member of the legendary Jazz Messengers led by iconic drummer Art Blakey.

Malafede Trio This muscular Italian trio led by bassist Federico Malaman are the project’s band-in-residence, teaching and performing throughout the week.

Andreas Varady Snapped up by Quincy Jones’s management company when he was still in his teens, the Limerick-based guitar prodigy will perform with his own family trio.

National Youth Orchestra of Scotland/Yazz Ahmed The entire orchestra is attending the festival as students, and will give a performance directed by the project’s musical director, Malcolm Edmonstone, featuring British-Bahraini trumpet and flugelhorn player Yazz Ahmed.

Sachal Vasandani The rising US singer arrives with new arrangements of Nat King Cole’s music which he recently performed at Jazz at the Lincoln Centre in New York.

Patrick Freyne on Love Is Blind: It’s Gilead, Love Island and Blind Date rolled into one

Patrick Freyne on Love Is Blind: It’s Gilead, Love Island and Blind Date rolled into one
2

Caribou’s Dan Snaith: ‘A lot of pop music is really challenging and interesting’
10