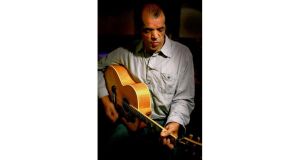 'I was known as the other guy': Dave Murphy, above, was Dublin's best known black musician after Philip Lynnott. Photograph: Bryan O'Brien.

IT’S THE END of the decade in Dublin. The cold and the recession are biting deep, and you’re wandering around the city centre in search of a warm, welcoming and – you hopefully – cheap night’s entertainment. You reach the Bailey pub in Duke Street, and hear the sound of an acoustic guitar, skilfully plucked, wafting from the upstairs windows. You go up the stairs, pay the modest admission fee, and find yourself sitting amongst a small, bohemian group of music lovers, the scent of their rolled-up cigarettes permeating the air. Some of them have their guitars with them, and are waiting their turn to go onstage and play.

The evening’s host, Dave Murphy, is warming up the crowd with some of his own bluesy compositions. At the end of the night, he’ll return to the stage to close the evening’s performance, providing a neat little musical envelope for the young talent on show. During the evening, a succession of young buskers and singer-songwriters take their turn onstage, performing a mix of cover versions and their own compositions. The names don’t ring a bell – Glen Hansard, Mark Dignam, Mic Cristopher – but their own songs have a nice ring to them. With a little encouragement, these kids could go far.

Twenty years later, another decade has come to an end, but Dublin’s own Tuesday night music club is still going strong. Billed as “Dave Murphy and Friends”, but known to Dublin denizens as “singer-songwriter night”, the weekly event takes its cue from the city’s folk clubs of the 1960s and 1970s that Murphy used to frequent as a young Dubliner. It started out at the Bailey in 1989, then moved to McDaid’s pub, before settling for the rest of the 1990s in its spiritual home at the International Bar on Wicklow Street. It’s currently ensconced at the Banker’s pub in Trinity Street, where it continues to showcase up-and-coming artists such as Nick Fitz, Matt Lennon and Dave Flynn.

There’s hardly a single Irish singer-songwriter of note who hasn’t tried out his tunes on the crowd at Dave’s night at some time or other over the past 20 years. Before they became well-known names on the Irish scene, such artists as Mundy, Gemma Hayes, Declan O’Rourke, Paddy Casey and Damien Dempsey honed their craft via regular slots on singer-songwriter night.

“I was walking through town, and seeing all the posters for upcoming gigs, and it struck me, they all came through the International,” recalls Dave Murphy. “And not only that, but they were regulars. They came in every Tuesday, for a couple of years on the trot.” Murphy has watched many of his regular guests go on to enjoy success in the music business, but few of them stay away for very long – on any given Tuesday night, you might spot a well-known face among the small audience of 40 or so, waiting their turn to go onstage and try out a new song.

“From time to time they just pop down, if they have a new tune and just want to kickstart it with an audience. Mundy was the last down, Declan O’Rourke loves doing it, and Paddy Casey. It is great that they can see the benefit of it and still come down on the QT, no fuss, and they can just sit in and then get up and play a new tune.” Many of them come back because they feel they owe a debt of gratitude to the man who gave them their first opportunity to perform on stage.

Ask any alumnus of Murphy’s night, and they’ll tell you that Murphy was not just the promoter – he was also the resident mentor, teacher and musical spirit guide.

“Dave kind of nurtured us all and he trained us in many different ways,” says Mundy, whose regular slots at Murphy’s night led to him getting a deal with Sony and getting one of his songs on the soundtrack for Baz Luhrmann’s Romeo + Juliet. “He put me on after Christy Moore one night. And I was only a young lad then. He saw that I had some ability, but he wanted to see if I had some other sort of a power as well. It was all about building confidence. And definitely a great place for learning.”

Paddy Casey, another singer who “graduated” from the International, recalls performing his own songs at Murphy’s nights while still too young to get served a drink at the bar. “It was a great way to shape songs, and it gave you the self-belief to think of yourself as someone who writes songs.” Murphy’s route to the International began when he was a youngster in Dublin, playing with the Artane Boys’ Band. “I was orphaned as a kid – I never knew my parents,” he recalls. “I went through the whole rigmarole of religion, being brought up by the State, the nuns . . .” The young teenager’s natural talent for singing and playing musical instruments earned him a place in the Artane Boys’ Band and by the time he left at the age of 16, he had become the band’s leader.

“We had a crack choir, an elite choir, six of us, and we went out and sang for Bishop McQuaid. We didn’t get a bloody penny for it – if you got a sweet you’d be lucky.” He did, however, get something of more lasting value from his time in the Artane Boys’ Band – a diploma in music, which has enabled him to earn a living from teaching music. Back in the late 1960s, however, all a young muso wanted to do was join a beat group and score chicks.

After sitting in on trombone with a few local showbands, Murphy joined a progressive soul combo called The Purple Pussycat, who based their sound on US band Blood, Sweat Tears. The group contributed two cover versions – You Made Me So Very Happyand River Deep, Mountain High– to a 1969 compendium of Irish rock entitled Paddy Is Dead And The Kids Know It.

But it was the folk and blues sounds coming from Greenwich Village and the Mississippi Delta that really captured the young Murphy’s musical imagination.

“I started playing solo about mid-1970s. I’d swapped the brass for the guitar and was in my Dylan, Donovan, Leonard Cohen phase, the whole bunch of them. I taught myself the basic folk style, and I spent a summer learning from book of Mississippi John Hurt tunes, so I could do the clawhammer in various styles and tempos. And the folk clubs were around, the Coffee Kitchen in Molesworth Street, the Universal, the Swamp. I was doing the folk circuit, alongside people like Luka Bloom and Rita Connolly. We were just kids, 18 or 19, playing round the scene. Rita was very Joni Mitchell-esque then.”

He also busked on Grafton Street before it became a car-free zone, and had a regular gig at the Dandelion Market long before U2 strutted in and took over the place. “I was known as ‘the other guy’,” laughs Murphy, referring to his status as the city’s second best-known black Irish musician after Phil Lynnott. Back then, says Murphy, buskers were thin on the ground, so he had the run of Grafton Street. Come the 1980s, however, the street was ringing to the sounds of Van Morrison’s Sweet Thing and The Waterboys’ Fisherman’s Blues, as a new generation of young folkies set up their pitches outside Bewley’s, Switzers and any other available space.

For these hungry young buskers, Tuesday night was a chance to come in out of the cold and perform to a warm, receptive audience and maybe even get a chance to further their career. As folk singers came back into vogue following the success of Suzanne Vega, Tracy Chapman and Michelle Shocked, AR people from the major labels would often drop in to Murphy’s Tuesday night club and check out the fresh talent. And Murphy met his partner, Nuala Finnegan, on one particular Tuesday night when she got up to sing a few songs at his showcase.

Twenty years later, Murphy is still providing a showcase for young singer-songwriters, and keeping the spirit of the 1970s folk clubs alive.

“There’s no PA, there’s no amps, there’s no electrics. There’s just the voice and the guitar – people come in and are really surprised.

It’s really something different to the usual noisy night out. People have come in and been completely wowed, cos it’s not shoved into your face.” He and Finnegan have two young children, and Murphy is still teaching at his local community centre, so he hasn’t had time to take stock of his time as the ringmaster of Dublin’s own acoustic circus. A compilation CD, Songs From A Small Room, was released in 2000, featuring artists who had performed there, but the recession reared its ugly head this week when a planned celebration concert at Vicar Street, to feature Declan O’Rourke, Damien Dempsey, Gemma Hayes, Mundy and Paddy Casey, was cancelled due to poor ticket sales.

There may be another chance to celebrate Murphy’s contribution to Ireland’s rich musical tapestry later this year, but meanwhile, if you find yourself wandering around town on a cold Tuesday night, looking for somewhere warm and welcoming, where you can listen to young musicians play and maybe even do a song or two yourself, you know where to go.

Dave Murphy and Friends is at the Bankers pub, Trinity Street, Dublin, every Tuesday night