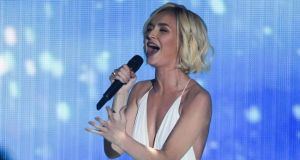 Polina Gagarina of Russia received a warm reception from the 10,500-strong audience to qualify for the final of the Eurovision Song Contest 2015 on on Tuesday night in Vienna, Austria. Photograph: Nigel Treblin/Getty Images 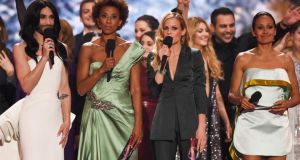 Conchita Wurst, Mirjam Weichselbraun, Alice Tumler and Arabella Kiesbauer perform on stage during the first semi-final of the Eurovision Song Contest 2015 on in Vienna, Austria. The final will take place on May 23rd, 2015. Photograph: Nigel Treblin/Getty Images

Hotly-tipped Russia qualified for the Eurovision Song Contest final last Tuesday night and received a strong response from the 10,500 audience members in the Wiener Stadthalle – and none of the booing that it was worried that Polina Gagarina, singing “A Million Voices”, would receive as an expression of protest against Russian foreign policy.

The crowd reserved its most enthusiastic response, however, for Serbia’s barnstorming disco number Beauty Never Lies sung by Bojana Stamenov, which was also a qualifier.

Also as widely expected, Estonian performers Stig Rästa and Elina Born qualified with Goodbye to Yesterday, a moody duet about a relationship gone wrong, staged and filmed like a music video.

The Finnish punk band PKN, made up of four adult men with developmental disabilities, did not qualify, though they had been rated in the top six to win overall.

Clearly, addressing a timely socio-political issue in a Eurovision entry is a winning strategy these days. All three of the evening’s topical numbers qualified: Armenia’s Chase the Shadow, about the Armenian genocide; Hungary’s pacifist Wars for Nothing; and Romania’s De La Capät/All Over Again, which tells a story of a family separated by economic migration.

The number with arguably the most youth appeal of the evening – Belgium’s 19-year-old Loïc Nottet singing the Lorde-influenced “Rhythm Inside,” did qualify, while Denmark’s Anti-Social Media did not win over voters with their “Just the Way You Are,” which channelled the early Beatles.

The semi-final boasted four solo female performances, of which three qualified – Greece’s Maria Elena Kyriakou with One Last Breath, Albania’s Elhaida Dani with I’m Alive and Georgia’s Nina Sublatti with Warrior; the Netherlands’ Trijntje Oosterhuis did not qualify. Other non-qualifiers were Belarus, the Former Yugoslav Republic of Macedonia, and Moldova.

On Thursday, 17 acts will compete for the final 10 places in the Eurovision final, including Ireland’s Molly Sterling.