Radiohead, Charlotte Gainsbourg, Beck and Johnny Marr have all queued up to work with Connan Mockasin, but the shy New Zealander with the childlike voice says he often thinks of giving it all up 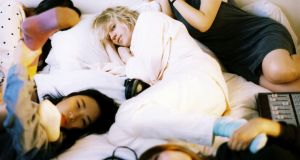 It takes only minutes for Connan Mockasin to casually mention something no fan wants to hear: the idea of quitting music. It’s not that things aren’t going well. Since releasing the funky pop odyssey Forever Dolphin Love in 2011, something about Connan – an enigmatic figure with tassels of blond hair and a childlike singing voice – has sparked an unlikely momentum.

Famous admirers, from Jarvis Cocker to Tyler, the Creator, have sprung up steadily. Radiohead invited him on tour; Charlotte Gainsbourg asked him to write songs with her; Beck and Johnny Marr have joined him on stage.

“It feels like it’s all been by mistake,” says Connan, a soft-spoken 30-year-old from New Zealand. He’s grateful for how things have turned out, he adds, but there’s no obligation to continue. If the ideas stop coming, if the excitement wears off, if it starts to feel like work, then he’ll walk away.

Today, however, is probably not the best time to discuss the issue. “I’ve had my first day off because I’m sick and I’ve spent it in a Paris hotel doing interview after interview, so I can’t imagine what it’s like for people who are successful. I’m only just starting a career and it feels like there’s no time to think for myself.”

This, it should be noted, comes across good-naturedly. There is no pretension to Connan. In fact, for someone trying to eat dinner while battling sniffles and fielding questions, he seems exceptionably polite and amiable.

It’s also worth noting that this is not the first time he’s considered leaving music. After moving to London in 2006 with his band Connan and the Mockasins, a warped blues outfit named after his ability to craft moccasins from motorbike tyres, he ran out of money quickly.

“My first six weeks, I was mostly homeless and living in parks. That was my first time overseas, which was really depressing. It took two or three years just to get comfortable.”

Though the band persevered, interest from the music industry gradually became overwhelming. Connan found himself in the unusual position of being asked to record an album with Fatboy Slim before he’d even made a full-length of his own. But, convinced that record advances were used to tempt musicians into sacrificing control, he grew disillusioned.

“I’d given up,” he says. “I was upset with how the industry seemed to work, so I decided I didn’t want to do music if that was the way things were done. Then I went back home and my mum insisted that I make a record. I didn’t think anyone would ever hear it, so I was just making it for her, really.”

Retreating to an abandoned house he believes was haunted, Connan created an imaginary soundtrack full of melodic vignettes about uniformed unicorns and Japanese genetics. When a friend heard a few songs, he couldn’t resist sharing them with London DJ Erol Alkan, who wanted to put them out through his Phantasy Sound label – on terms Connan felt comfortable with. The resulting record, Please Turn Me into The Snat, was released on Connan’s mother’s birthday in 2010, before being reissued as Forever Dolphin Love on a wider scale the next year.

Describing Connan’s idiosyncratic sound proved difficult. Some strained for comparisons like Syd Barrett or David Bowie; others reached for catch-all adjectives like “otherworldly” or “psychedelic”. But the singularity of his songwriting was best illustrated by a series of cinematic videos. Each one conveyed a surrealist wonderland: Connan dancing with mythical creatures at a cardboard disco; Connan lounging in a swampland with slices of lemon for spectacles; Connan wandering London as an expressionless clown; Connan levitating in the woods, surrounded by sorcery.

New album Caramel drifts even deeper into the abstract, being loosely based around a shadowy figured called The Boss who longs for the dolphin made famous by Forever Dolphin Love. Once Connan began channelling this idea into Prince-worthy pop confections, he felt the album should sound like caramel – sultry hooks, buttery guitar, wispy compositions – and resolved to record it in a Tokyo hotel room within a month.

“I like deadlines and limitations,” he says. “There’s too many options in a studio. It stops any ideas; I get too stressed. It’s important to feel excited when you’re making a record, which can be quite daunting, and Japan does that to me. I find it such a mysterious place. That’s what attracts me to music: the mystery. I get bored when everything seems so refined nowadays.”

In the lead-up to recording, Connan’s father (who’s originally from Cork) suffered a heart attack. That necessitated a return to Te Awanga, the seaside village where Connan grew up. It was there that he took up guitar lessons to combat isolation after a daunting move to a bigger school. The impetus to take it seriously, however, only came when Connan first heard Jimi Hendrix’s Voodoo Child while watching the movie Under Siege.

“I’d never heard anything like it,” he says. “I asked my mum, ‘What’s that?’ And she said: ‘There’s a record in the cupboard called Band of Gypsies.’ That got me into blues guitar, like BB King, and then I just overcooked it. I went to high school and didn’t want to be involved with anything that brought attention. I became very shy.”

Connan still gets nervous before shows, though the feeling of connecting with an audience helps counteract any self-doubt. If he quits music, he’d like to try to stand-up comedy, even if just for friends. “I like the idea of being naive, of not knowing. There’s a nakedness to being nervous that makes you feel quite alive. It gives me confidence and excites me to do it again.”

Wouldn’t he miss that feeling, then, if he stopped playing music? “I think I’d miss it a lot, yeah . . . Having people encouraging me is what makes me feel like doing this.”