Move over Ring and Dingle: the pop-up Gaeltacht is here

Fed up hearing that Irish was dead, two friends brought the Gaeltacht to Dublin pub

“We’d seen an awful lot of negativity towards the Irish language and we wanted to shine a more positive light on it,” says Peadar Ó Caomhánaigh who runs monthly meetups for Irish speakers in Dublin with his friend Osgur Ó Ciardha. 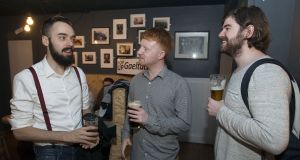 Emmanuel Bourgerie from France; Matthew Ó Cribin and Dylan Armstrong from Ashbourne, at a Pop-Up Gaeltacht event in the Piper’s Corner in Dublin. Photograph: Dave Meehan

Irish is an inherent part of who I am, yet I rarely speak it. It’s tough to find outlets to speak a language in a country where most people lack interest or passion for their native tongue. After I finished school, my social circle of fellow Gaeilgeoirí reduced significantly to a scattering of family members and one close friend. I have a couple of Irish Times colleagues who I occasionally speak Irish with. I hate to say it but Irish is not a part of my daily life.

Over the years various attempts have been made to run social events around Ireland to keep the language alive among our younger speakers. When news of an Irish pop-up Gaeltacht first appeared on Facebook, I was sceptical. Would these monthly meet-ups be any different to previous attempts to make Irish more accessible to the wider public?

Entering the Piper’s Corner traditional music pub on Marlborough Street in the north inner city a couple of weeks ago, I expected to find a handful of Gaeilgeoirí exchanging pleasantries in a corner. Instead I was met with a packed-out venue filled with “dia dhuits” and “conas atá tús” echoing across the bar.

Peadar Ó Caomhánaigh, co-organiser of the first pop-up Gaeltacht event in Dublin last November, greeted me on arrival. He was not surprised by the high turnout and said 200-300 attendees had become the norm at these monthly events.

“We’d seen an awful lot of negativity towards the Irish language and we wanted to shine a more positive light on it,” said Ó Caomhánaigh, who came up with the idea with his friend Osgur Ó Ciardha. “Irish is not dead or useless. We knew it existed in the city and wanted to give it an outlet.”

The duo wanted to create a relaxed atmosphere for speaking Irish and move away from the more pressurised “conversation circle” concept, explained Ó Caomhánaigh. They were keen to reach out to Irish speakers who lacked the confidence to attend Club Chonradh na Gaeilge on Harcourt Street or who had no Irish speaking friends in the city.

“We’re realistic about this. Irish is not the vernacular now and the Gaeltacht is in a dreadful state. There’s mass migration of young people out of these areas and the future of the language is probably in urban areas. We wanted to re-create that Gaeltacht-style atmosphere in our cities.

“We’re not doing anything new. All these disparate groups of Irish speakers have been meeting up and keeping the Irish language alive and well. We’ve just come up with a way to bring them all together and add in the magic ingredient of a few scoops.”

Outside the usual hangouts

Cuan Ó Seireadáin, who was attending the pop-up Gaeltacht for the first time, was quick to highlight his frustration at the never-ending references to the nation’s dying language.

“Look at the people here tonight, the people who choose to send their children to Gaeilscoileanna, people who watch Irish-language TV and listen to radio, people who speak it every day. It’s ridiculous to say the language is dead,” he said.

Rónán Mistéil from Blackrock in Dublin said the city was full of Irish speakers but said he often mixed with the same small group of Gaeilgeoirí. “These types of events introduce you to new speakers and bring you outside the usual hangouts.

“These kinds of events have been held before but they’re often based on music,” he added. “If people don’t enjoy that type of music, then they don’t come. This event is informal and open.”

In the smoking area a group of young women in their 20s were huddled on stools, chatting animatedly about their summer holidays.

“Irish is not my native language but I still think it’s very important to keep it alive and speak it,” said Ola Majekodunmi, who went to a Gaelscoil. “People say the language is no longer in use but look around you – we’re all speaking it.”

One of her classmates from Coláiste Íosagáin in Stillorgan, Daire Hannon, had just returned from her Erasmus studies abroad and was eager to keep up her Irish after a year of speaking German.

“What I love about the language is that some words just work better in Irish. The translations don’t always work in English. I also love being able to speak it when I go abroad. Some words just come easier to me through Irish.”

Since last November’s inaugural night out, the pop-up Gaeltacht has spread, with events being held in Perth, Dubai, Vancouver, New York and even La Paz in Bolivia.

“This is about asking people to look deep inside themselves and at their own relationship with the language; not as a school subject or as something you hated,” said Ó Caomhánaigh.

“We’re not trying to change Government policy. We just send up a bat signal to say Irish speakers are out there, and so far it’s worked.”

Slavoj Žižek: ‘Joe Biden is long-term the same catastrophe as Trump’
6 The moment the wheels came off
7

Shots in the Dark: A portrait of Britain as a struggling team
8

Why Didn’t You Just Do What You Were Told?: A superb collection
10