Mona, the world’s most expensive joke? 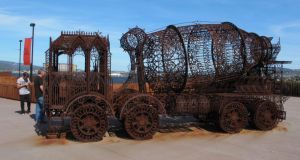 An exhibit at Mona in Tasmania 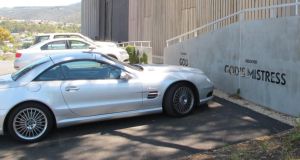 An exhibits at Mona, Tasmania: the parking spaces for ‘God’ and ‘God’s mistress’ 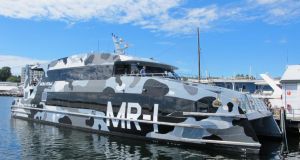 Mona Roma, a gray, camouflaged catamaran that ferries visitors to the museum 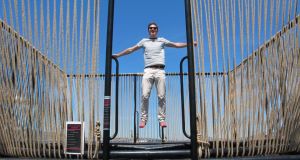 A Tasmanian gambler with self-diagnosed Asperger’s and a searing disregard for authority and religion has become the overlord of one of the most unusual art museums in the world. The Museum of Old and New Art (Mona), hewn into a rock a few miles upriver from Hobart, shakes the foundations of every tenet of the museum experience to create a rollicking, irreverent, sometimes puerile but ultimately extraordinary trip deep into the subconscious mind of an ex-Catholic, multi-millionaire art collector.

Despite David Walsh’s deliberate espousing of bad taste and sometimes juvenile humour, he has created an utterly absorbing museum experience. More than one million people have visited since it opened three years ago to become the largest tourist attraction in Tasmania.

Mona is arguably not about art at all in that it seems to be a temple for founder Walsh to play god. And he’s in on the joke. He helpfully titles his car-parking spaces God and God’s Mistress and lives on site with windows cut into his floor so he can watch his creation unfold from above.

Here lies the fascinating contradiction at the epicentre of this subterranean, tongue-in-cheek poke at the self-regard of the art world. A self-described “rabid atheist” shouldn’t have any interest in replacing one type of church with another. Mona, for all its two-fingered posturing, has many of the characteristics of the Catholicism Walsh replaced as a child with Sunday morning visits to Hobart’s art museum.

Walsh also rejected education, dropping out of a degree in mathematics to spend hundreds of hours perfecting a gambling system. A career counting cards and betting high allowed him to fund Mona and its collection of art and antiquities, which cost more than €200 million.

It is rather telling that one of Walsh’s favourite exhibits is a library of 6,000 blank books by Cuban artist Wilfredo Prieto. Other pieces are less restrained. The architecturally exquisite underground museum is dripping with headline-grabbing objects such as Wim Delvoye’s poo machine and Jenny Saville’s portrait of a bearded transsexual.

Chris Ofili’s notorious painting of the Virgin Mary, which provoked hysterical protests in New York, sits quietly, almost unnoticed, in a corner. Mona, a museum dedicated to the themes of sex and death, has somehow extinguished the potency of Ofili’s elephant dung masterpiece. And that’s the really shocking thing about the gallery: none of the art really shocks any more. It’s interesting that a museum with such a racy reputation seems to have such a broad audience. On my recent visit, it was sprinkled generously with silver- haired Australian couples who were enraptured by the mesmerising space and seemingly unfazed by walls of vulvas and chocolate sculptures of suicide bombers.


‘Euthanasia Machine’
Walsh must be a little miffed that his plan for an inhouse abattoir drew such little ire. He must scratch his head in wonder that Greg Taylor’s Euthanasia Machine , a living-room couch where screen prompts invite you to inject yourself with a dosage sufficient to kill, provokes a Disney-like thrill rather than horror. “Now I am the bloody institution. Now I’m the arbiter of good taste. The thing I abhor,” he wryly admitted in a recent article in the Guardian .

It seems the forced messiah complex, the blatant contradictions, the jokes and the shock art are really a front for a genuine desire to revolutionise the often staid museum experience.

Each visitor spends on average 3½ hours navigating Mona’s labyrinthine spaces guided by the O, a genius iPod app perhaps more fittingly titled The Gospel of David , filled with his witty explanations of the collection and devoid of unpalatable art-speak. The O encourages the visitor to rate each piece – a clever ruse to engage an audience more interested in Twitter than Tracey Emin.

Many of the exhibits are interactive. As I bounce on Chen Zhen’s outdoor trampoline, chimes are activated to enhance the experience. I join the queues to play an eccentric game of table tennis on a table riven with deep valleys. And I add my own pulse to the line of 300 light bulbs by artist Rafael Lozano-Hemmer, who collects viewers’ heartbeats to create a flashing symphony of pulsating light.

Most impressive is the unlikely combination of old and new art. Egyptian mummies, Greek coins and Roman mosaics are juxtaposed winningly with a bloated Porsche sculpture and Bitfall , a waterfall of high-frequency words sourced from the internet, a piece by Julius Popp that may be familiar to those who saw it recently exhibited at the Science Gallery in Dublin.

The curation throughout is meticulous. Many of the spaces are darkened and punctuated with illuminated treasures embedded in the walls. The real revelation is the absence of the white cube, a ploy that pays dividends as the exhibits assume an extra resonance in their spectacularly lit surroundings.

The museum is filled with unlikely curatorial successes. The walls in several galleries are draped with red velvet curtains, evoking the feel of a bordello; a sandstone cliff cut into the foundation of the structure is the equal of any sculpture on display in the museum; a glass and rock subterranean tunnel leads to a chamber housing giant lead books by Anselm Kiefer; it also connects to another pavilion, featuring a more orthodox library containing thousands of art books.

Bored invigilators seem thin on the ground. Perhaps they have absconded to the cocktail bar incorporated into the lowest floor of the museum to test Walsh’s theory that the art can be experienced in a whole new way after several glasses of wine. Drinks are also served on the Mona Roma , a gray, camouflaged catamaran that ferries visitors from Hobart to the museum. The boat sets the tone for what lies ahead. It featured fibreglass sheep as seats, and a “Posh Pit” with a glass wall of graffiti deriding any VIPs within it who are foolish enough to pay the €50 entrance fee.

A perplexing tennis court straddles the space directly in front of the entrance to the museum. It seems to have no artistic function; Walsh just likes tennis. A restaurant, bar and cafe are spread across the complex and are supplied by Mona’s inhouse brewery and vineyard. Pink bean bags lie strewn around the grounds for art pilgrims in need of a break. Riverside pavilions offer five-star accommodation. Biannual music festivals are held on the grounds and future plans include a hotel and a possible expansion to China.

Mona cost twice as much to construct as the Bilbao Guggenheim. Walsh has also had to contend with a recent hefty tax bill; in late 2012, he settled a dispute with the Australian Taxation Office for an undisclosed sum. Entrance was originally free but now this privilege extends only to Tasmanian residents, who appear to have taken the museum to heart, probably in no small part thanks to its effect on tourism and the economy.

Walsh, famed for his secretive persona, has also seen his popularity soar locally and internationally with a rash of glowing reviews for his museum by art-world insiders. He is also renowned for his generosity.

Despite his protests to the contrary, Walsh clearly believes in something. If not religion then surely the transformational power of art. He also believes in himself.