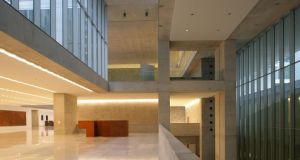 Sense of place: part of Grafton Architects’ building for Bocconi University, in Milan 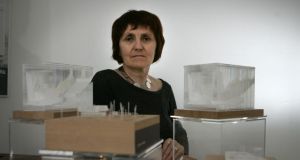 In February 2009 Grafton Architects’ new faculty at Bocconi University, in Milan, was announced as a finalist for the distinguished Mies Van der Rohe architecture award. Grafton was the first Irish practice to make the shortlist of five contenders.

The award eventually went to Norway, but the Bocconi faculty had already been recognised as a winner when it won the inaugural World Building of the Year prize, in 2008. This accolade marked the end of a buoyant era for Irish architecture, before the lights went out on a profession that would be all but decimated by the spring of 2009.

Grafton Architects had won through an invited international competition, and although there is nothing unusual about foreign achievements in global architecture, in the history of Irish-made architecture abroad its success was a first.

The panel chose Grafton’s scheme for its ability to capture the essence of the Italian city in a confident, contemporary form that connects directly with its urban context.

The Università Commerciale Luigi Bocconi, a private institution founded in 1902, is one of Italy’s leading colleges of business, economics and law and is deeply enmeshed in the mercantile and social fabric of Milan. Its early-1940s building form, designed by the Italian rationalist Giuseppe Pagano, is a tautly articulated cruciform with open colonnades supporting the blocks; in designing the new building the Irish architects would overlook neither its predecessor’s modernist ideologies nor its engagement with the street.

Grafton drew on several Milanese sources: from the walkway above the roof of the city’s cathedreal to Il Broletto, the former civic hub; from the city’s courtyards to the ceppo stone favoured by modernists, which was ultimately used to clad the new building.

The result is a very Milanese monument, a tough shell with a translucent interior. Suspended within a series of massive beams, three floors of luminous academic offices fragment the space between to create courtyards, gardens and light wells.

Beneath them stone-flagged open areas allow the city to seep through as the space plunges into a vast cavern from where a 1,000-seater aula magna breaks forth, its cantilevered wall hovering above a transparent frontage to connect with its context, in what the architects call a window to Milan.

Grafton Architects was established in Dublin in 1978 by Yvonne Farrell and Shelley McNamara. They were members of Group ’91, the collaborative that planned the winning scheme for Ireland’s first really significant urban regeneration, at Temple Bar in Dublin. Grafton evolved as the city evolved, as Ireland shifted from an agricultural to a knowledge economy.

Farrell and McNamara belong to a generation of Irish architects emerging in that period who embraced the intelligence of modernism while rejecting the aspects of postmodernist theory that reduce architecture to a mere stage set.

Their work at Bocconi pays testament to that, the product of years spent developing a specific architectural language and a re-evaluation of a sense of place. Its inclusion alongside the city’s other monuments – the duomo, Galleria Vittorio Emanuele II and the central train station – was endorsed by Stefano Casciani, editor of the influential Italian architecture journal Domus, who concluded that Milan desperately needed a high-quality piece of architecture like Bocconi in order to reinstate its status as one of the great modern cities.

Grafton would go on to win the Silver Lion for Architecture as New Geography at the Venice Biennale in 2012, the Royal Institute of British Architects’ European Award, for the University of Limerick Medical School, and two further competitions for university faculties in the French city of Toulouse and in Lima, the capital of Peru.

Mad Men made perfect sense during the swirling disorder
8