The Dubliner grew up in the oral tradition of stories and singing – ‘a vivid, interesting and textured world’. However complex her poems may be, they never lose touch with the energy of a shout in the street 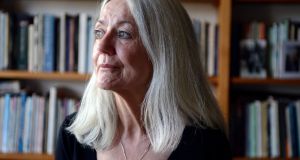 Although Paula Meehan was born in 1955 and grew up in the new working-class Dublin suburb of Finglas, she is one of the last artists with roots in the city of Seán O’Casey (see the entry in this series for 1926). She spent her earliest years in a tenement on the corner of Sean MacDermott and Gardiner Streets in the old inner city.

Meehan recalled that world in a 2009 interview with Ann Sionnach literary magazine. “I grew up in an oral tradition: the stories, the singers, the old people, the lore . . . I soon developed, I believe, a hunger for ritualised sound, in and of itself . . . The old whores were still around when I was a child. It had the lore of the docks and the dockland community.

“It was a vivid, interesting and textured world formed with a lot of song, a lot of music, not least the music of the city itself, the steel hoop rims on cobbles, the horses’ hooves . . . The music of the Latin, of the bells of the church, all of that – a fantastically rich childhood in sonic terms.”

The imprint goes deep in the work of Meehan, a cosmopolitan figure. Her themes are vast, drawn as much from Buddhism, Greek mythology, feminism and ecopolitics as from Irish life. But the intense, bustling vividness of that old community – its arguments and its songs and its sonic clamour – rings through her poems.

The poems, however formally complex they may be, never lose touch with the energy of a shout in the street. Eavan Boland said that her poems “seemed to resist their confinement on the page”. It makes sense that her artistic life began in the radical Children’s T Company, putting on plays in streets, on beaches and in playgrounds. Meehan is unafraid of being a public poet.

This fearlessness was obvious in her second collection. Reading the Sky was published at a time when Irish poets tended to react against the turmoil in Northern Ireland by approaching politics obliquely.

In Hunger Strike, on the other hand, Meehan creates arguably the most successful contemporary artistic response to the slow death of Bobby Sands and, in particular, to the way that awful event seeped unavoidably into everyone’s consciousness:

I neglected the garden that season,

Took a desultory spate at the hoe

Now and again. I forgot the insistent

The narrator’s spiritual starvation parallels the hunger strike, until:

An old neighbour woman came over

Once near the end. She brought

Soda bread and home made butter

So yellow it hurt to look at it.

The “near the end” glances off Sands’s death – evidence of Meehan’s emerging gift for occupying the public arena without losing poetic subtlety.

Equally, in The Garden of the Sleeping Poet Meehan’s temporary exile to the US triggers collective memories:

By ghosts of those who came before me:

The bewildered women on Ellis Island,

The muscled men who withered to build

Paved with other men’s gold.

There is in these poems a sense of possession, of the poet inhabiting and being inhabited by forgotten or unfathomable histories.

In one of the best-known poems that followed Reading the Sky, The Statue of the Virgin at Granard Speaks, Meehan could even possess the Virgin Mary. That she could do so with perfect conviction was a mark of the potency of the public voice she had created.

Life after a life sentence: I’m 39 and scared of everyone
7