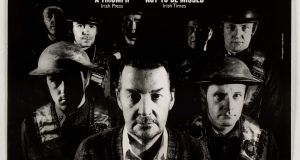 Writing Observe the Sons of Ulster was an eye-opener for Frank McGuinness, a Catholic republican

In 1985, as the Troubles ground mercilessly on, the memory of the first World War was still a source of division. In the Republic there was a willed amnesia about the vast level of participation in the war by ordinary Irish nationalists. In Northern Ireland the war was largely “owned” by the Protestants, for whom the sufferings of the largely loyalist 36th Ulster Division counterweighted nationalist myths of blood sacrifice.

Those divisions would be dramatised in the most appalling way when the IRA bombed a Remembrance Day ceremony in Enniskillen in 1987, killing 11 people and injuring 63, all of them Protestant. In this context it was remarkable that the Abbey Theatre would stage a play by an Ulster writer from a Catholic background – a play, moreover, that attempts to understand the motivations and mentalities of a group of loyalist soldiers in the 36th who go over the top to their doom at the disastrous Battle of the Somme on July 1st, 1916.

As Frank McGuinness, its writer, put it: “It was an eye-opener for a Catholic republican, as I am, to have to examine the complexity, diversity, disturbance and integrity of the other side, the Protestant people.”

McGuinness, who is from Buncrana, Co Donegal, came to prominence in 1982, when the Abbey staged The Factory Girls. It followed a group of shirtmakers through their protest occupation of a factory. Although Observe the Sons of Ulster Marching Towards the Somme feels very different, its form is not dissimilar: a same-sex group under the pressure of a conflict. Observe the Sons, though, is a more mature and complex work, ditching the realism of the earlier work and using the stage with a fluidity that allows for multiple locations to exist at the same time.

McGuinness was clearly conscious that, in dealing with the contested memories of Irish history, memory itself had to be on the front line. The play takes place in the mind of Pyper, the sole survivor of the group, now an old man.

It is essentially a ghost play: the dead appear to him at the start, torturing him with memories. “Why does this persist? What more have we to tell each other? I remember nothing today. Absolutely nothing . . . I do not understand your insistence on my remembrance.”

Pyper knows that memory, as in the work of Brian Friel (see the entry in this series for 1979), is partly fiction: “Invention gives that slaughter shape. That scale of horror has no shape.” Yet he cannot escape the imperative of remembrance. The dead come back to life and occupy the stage. It may be no accident that there are seven of them – the iconic number of the other 1916 sacrifice.

McGuinness’s anxiety to do justice to the “integrity” of the cause for which these men give their lives does not give way to sentimentality or any easy endorsement of what they stand for. Pyper is a dark figure, scathing and self-destructive. Sexual unease (especially in relation to Pyper’s love for Craig, a young recruit), sectarian hatred, internal class differences and a sense of despairing futility vie with courage and loyalty. The shattering effects of the war on the men’s bravado and brave fronts are traced with compassion and delicacy.

The realisation dawns, as one of the men, Anderson, puts it, picking up on a line from Rudyard Kipling: “We’re not making a sacrifice. Jesus, you’ve seen this war. We are the sacrifice.”

Bitter as that realisation is, the play, as an act of imaginative generosity, at least held out the hope that the sacrifice need not be repeated forever.