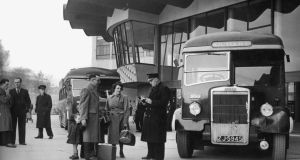 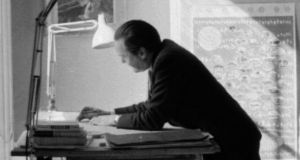 Great Scott: the architect Michael Scott in his drawing office on Merrion Square, in Dublin, in 1955. Photograph: Bert Hardy/Picture Post/Getty

In late 1948 a vast concrete carcass sat abandoned near Custom House in Dublin. This dramatic building site was to be the nation’s bus station – named Áras Mhic Dhiarmada but known as Busáras – a brave new Fianna Fáil project coming out of the 1940s amalgamation of various transport companies to form Córas Iompair Éireann.

Construction of this ambitious L-shaped structure had begun in 1946 but halted when a change of government in 1948 brought the interparty coalition to power.

The station was set to be exceptional: a large, predominantly glazed, flat-roofed reinforced-concrete building, sitting on an island site between the industrial eyesore of warehouses (today the IFSC) and the 18th-century splendour of Gandon’s Custom House. It had evolved from an initial two-storey circular design (1944) to the two rectilinear blocks (one eight-storey, one four-storey), hinged at a right angle and held in place by a double-height curved hall (1946).

It was to be pioneering for Ireland in terms of mechanical building services, double glazing, concrete technology and exotic materials. In many respects its construction signalled the most forceful statement of modernism in a post-Emergency Ireland. Here was modernist infrastructure coming into the centre of the capital, at the service of Ireland’s bus-travelling masses.

The station’s commission was mapped out between CIÉ’s chairman, AP Reynolds, who sought an image of speed and reliability for the transport body, and the man who was by then the most vocal force of Irish architectural modernism, Michael Scott (whose design for the Irish Pavilion at the New York World’s Fair is the 1939 entry in Modern Ireland in 100 Artworks). It was to be part of a series of Scott-designed technocratic CIÉ buildings of the 1940s, including Donnybrook bus garage and the Inchicore chassis factory. The building series brought to Dublin the British engineer Ove Arup. He was the likely source for Busáras’s signature wavy concrete canopy, carved out of 7.5cm concrete, cantilevered at 6m, and used to mediate between passenger concourse and open-air bus park.

The combination of Arup’s brilliance, Scott’s young, energetic design team and the 1940s dream of automobile travel brought this idiosyncratic international building into being. It captured the public imagination – and, from the outset, was clouded in controversy. As early as October 1946 The Irish Times published a projected view of the building, exaggerating its height and ultimately leading Scott to sue the paper for professional defamation. (It apologised and paid his legal costs.)

So when the new 1948 government shut the project down Busáras was already infamous. Was it too glamorous to be a transport hub? Shouldn’t its modernism be harnessed for government business, such as accommodation for the new postwar Department of Social Welfare? A suggestion that the building be used as a women’s unemployment exchange prompted Myles na gCopaleen to deride it as “the bust station”.

Building eventually recommenced in 1951: it would house the new welfare department in the office blocks and contain the bus station with ancillary restaurant, cinema and services between the double-height pillared concourse and the basement. This multifunctional public building generated ecstasy among local and international architects; looking at its plans, the Irish issue of Architectural Design declared it one of the masterpieces of modern architecture. Upon completion, in 1953, British and American journals published extensive articles, hailing it as Europe’s first postwar office building.

The excitement came from its hybridity. It was at once a beautifully crafted object, with Italian mosaic designed by the artist Pat Scott on pillars, canopies and walls; Irish oak floors in its rooftop restaurant; Danish bronze for windows; Portland stone cladding and Roman brick externally; and terrazzo stairways, guarded by Barney Heron handrails. Yet its modernist massing and presence were unequivocal, the primary influence being the early 1930s Paris buildings by Le Corbusier. The enormous concrete-framed, air-conditioned building would permanently change architectural technology in Ireland.

You can read more about Busáras in the Royal Irish Academy’s Art and Architecture of Ireland; ria.ie

Blood on the bog: A brother and sister hanged for an Offaly murder
4

Film-maker Pedro Costa: ‘There is no Beckett or Joyce in cinema’
9