Modern Ireland in 100 Artworks: 1942 – The Great Hunger, by Patrick Kavanagh 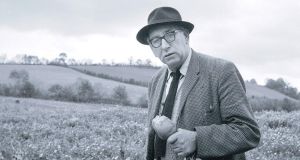 Hungry hills: Patrick Kavanagh could write with great lyric power about the ordinary life of an ordinary farm. Photograph courtesy of the Wiltshire Collection/National Library of Ireland

The world looks on
And talks of the peasant:
The peasant has no worries;
In his little lyrical fields He ploughs and sows;
He eats fresh food,
He loves fresh women, He is his own master
As it was in the Beginning
The simpleness of peasant life.

These mocking lines from Patrick Kavanagh’s long poem The Great Hunger echo in their dark satire Myles na gCopaleen’s attack, in An Béal Bocht, on the representation of Irish rural life. Kavanagh is the first English-language poet of real stature to emerge from a class that was much written about by others: the Catholic small farmers who were supposedly the heart of independent Ireland. But what he had to say was not quite what many wanted to hear.

Kavanagh, who grew up on 16 acres of what he called “hungry hills” in Iniskeen, Co Monaghan, could write with great lyric power about the ordinary life of an ordinary farm and found an audience in the late 1920s through publications such as the Dundalk Democrat and George Russell’s Irish Statesman. But as his voice matured he used it to evoke not just rustic pleasures but also poverty, loneliness and sexual frustration.

This was never more potently the case than in his ferocious The Great Hunger. Much of it was published, on the recommendation of John Betjeman, in the London journal Horizon in 1942, before the full poem was printed, in a limited edition, by the Yeats family’s Cuala Press, in Dublin, later that year.

The most obvious way into the poem is through its title. With the centenary of the Great Famine approaching, Kavanagh can be seen as mapping its long-term emotional and psychological consequences in an Ireland that had to learn to value continence and caution above all else. The soil of the farm has become both language and body for the poem’s protagonist, Patrick Maguire:

Clay is the word and clay is the flesh
Where the potato-gatherers like mechanised scarecrows move
Along the side-fall of the hill – Maguire and his men.

Maguire is an embodiment of the sexual sterility that would give Ireland, by the 1950s, the lowest marriage rate of any developed society. He has “stayed with his mother till she died / At the age of ninety-one”.

By then he was 65, and it was too late to think of a wife and children – a fate all too common in an Ireland where eldest sons waited to inherit the farm until their own chances of an intimate life had passed them by. “He saw his cattle / And stroked their flanks in lieu of wife to handle.”

These more playful elements remind us that the poem is not a work of sociology or polemic. The poem’s anger is controlled in its often subtle forms. Kavanagh’s withering conclusion that “The hungry fiend / Screams the apocalypse of clay / In every corner of this land” may be aimed at contemporary Ireland, but it also anticipates a far wider sense of absurdity and disillusion that will descend on much of European culture after the second World War.

You can read more about Patrick Kavanagh in the Royal Irish Academy’s Dictionary of Irish Biography; ria.ie

What is Houseparty, the app everyone’s talking about – and not in a good way?