‘Limerick School’ calls in some of its star pupils 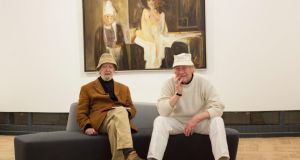 Pride of place: artists Jack Donovan and John Shinnors in front of Donovan’s Suzannah and the Elders (1975) at the ‘Personal Choice’ exhibition. Photograph: Alan Place. 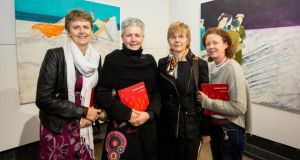 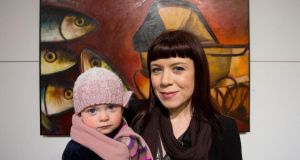 The artist Jack Donovan has a special place in the history of Limerick School of Art and Design. A student there from 1951, he was appointed its head – “a full-time job that I did not want”, as he later remarked with characteristic directness – in 1962, at the age of 28. His reading of it was that he was appointed because Limerick’s conservative vocational education committee did not want a “foreigner” in the position.

Donovan, who is now 80, was head until 1978. Among his students was John Shinnors, who remembers Donovan as a generous and free-spirited presence who taught largely by example, having established an impromptu studio for himself in a wide corridor to the rear of the school’s premises at the time.

Shinnors was particularly impressed by Donovan’s ability to tune out the movement and clatter around him and get on with painting, becoming irritated only when summoned to the telephone.

The two have remained close, and Donovan is one of 20 artists, former students and teachers at the Limerick college who make up an exhibition that Shinnors has curated, Personal Choice , at its Church Gallery.

Donovan’s mid-1970s painting Suzannah and the Elders occupies pride of place at the show, dominating one of the gallery’s end walls. Juxtaposing the gracefully nude Suzannah with a pair of lecherous clerics, it remains powerful 40 years later. Donovan’s work is generally rich in historical and autobiographical references. Although not religious, he has said he has no particular gripe with the church. But this painting seems to anticipate the tenor of the clerical scandals that came to light in the intervening decades.

Limerick School of Art and Design, which is now part of the city’s institute of technology, has become a large, bustling, multidisciplinary institution, with a strong reputation that reaches beyond the traditional fine-art disciplines of painting, print and sculpture and into areas including ceramics, fashion and lens-based work.

Shinnors concentrates on the older core disciplines, and it inevitably lends the show a retrospective quality, but it feels in no way tired or dated. Rather, as with the Donovan painting, there’s a feeling of continual relevance and reinvention.

The show also offers an insight into the school’s reputation for dynamism in the wider cultural life of the city and, indeed, the country. A large number of artist-practitioners have worked as lecturers, for example, and students present and past have engaged in such enterprises as Ormston House, the gallery and cultural resource centre in the city.


Personal tribute
The current head of school, Mike Fitzpatrick, is a case in point. He is an artist, a former director of Limerick City Gallery and, at the moment, interim head of Limerick City of Culture, after the abrupt departure of its chief executive and artistic director.

Personal Choice grew out of a conversation between Fitzpatrick and Shinnors. The idea was for an exhibition that would be a personal tribute to the school. It could be anything Shinnors had in mind. “Essentially,” Fitzpatrick says, “John said he could get a van, set off and round up an exhibition.” Which is not far off what transpired, in a more formal way – and with a substantially larger van.

After minimal negotiation, a list of 20 artists emerged. Once he had issued the invitations, Shinnors stood back. Artists could put forward whatever they wished, and he abstained from including himself.

“I believe that all visual art has its roots in and is based firmly in drawing,” Shinnors writes. If you have honed your representational skills in drawing, you can take off in any direction you choose, with “a lively sense of tradition”. The exhibition is indeed lively and occasionally even volatile.

Skim through the names and it makes an impressive list. It’s also an impressive show. There may be familiar and less familiar names, but pretty much everything has earned its place. Perhaps encouragingly, no “School of Limerick” emerges. People have their own ideas; they follow their own paths. But each artist is locked in an informed engagement with medium, form and subject. You might not instinctively have put these artists side by side, but once Shinnors’s choices are together you begin to see what distinguishes Limerick School of Art and Design and appreciate what makes it valuable: long-term commitment and a robust, independent, individual creativity.


Strong works
What stands out? We may know what to expect from, say, Diana Copperwhite, Michael Canning and Donald Teskey. Their strong contributions help you understand why they’re taken seriously. Equally, it is good to see Charles Harper, the school’s former head of fine art, and an exemplary lecturer there and at the National College of Art and Design, and Tom Fitzgerald, former head of sculpture, still challenging themselves, and still producing ambitious work.

Under the heading of undervalued artists could sit Jim Savage, Dietrich Blodau, Lorraine Wall, David Lilburn, Mike O’Neill and Richard Slade. Savage is one of those rare creatures for whom drawing is a primary medium, which may account for his relative neglect; his immersive landscape drawings of bogland at Roundstone, in Connemara, are superb.

Similarly, Blodau is essentially a printmaker. (He is also the sole exhibitor who wasn’t a student at the school but came there as a lecturer.) He shows some of the fine etchings he made of the Limerick he found following his arrival, in 1970.

Wall is a thoughtful, perceptive painter whose work is rooted in landscape. Lilburn dissolves the lines between drawings, maps, prints and memoir with tremendous originality. O’Neill’s endlessly, microscopically detailed drawings and prints are about the worlds we make and in which we live. Slade, whose intense, expressive works recall Patrick Graham, forcefully addresses the history of the college’s Clare Street site, which was a Magdalene laundry for a significant period.

More recent graduates include Anne Ryan, now based in London, whose inventive paintings incorporate the language of vintage Hollywood cinematic narrative, and Nuala O’Sullivan, who explores the iconography of 1950s Ireland.

That this synopsis omits discussion of Vivienne Bogan, Pat Fitzpatrick, Gavin Hogg, Gillian Kenny, Brian McMahon and Maighread Tobin is no reflection on their work. Shinnors’s choices encompass quite a time span, including his teachers, contemporaries and more recent successors at Limerick School of Art and Design. It proves that he has kept an interested eye on what’s going on around him.


Personal Choice: Twenty Artists from the Limerick School of Art and Design is at Church Gallery, Clare Street , Limerick, until April 25th