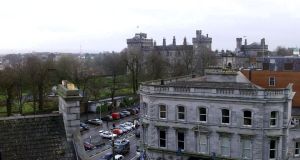 Minister of State for Tourism and Sport Michael Ring said Kilkenny had displayed “a relentless focus” on welcoming tourists.

Kilkenny has been named Ireland’s 2013 National Tourism Town by Fáilte Ireland, from a shortlist of 10.The award was designed by Fáilte Ireland to “promote those Irish towns and villages which are working hardest to enhance their appeal to tourists visiting their local area”.

Kilkenny has received a winning certificate along with a €10,000 grant towards “further developing itself as a tourism destination”.

Mulranny, Co Mayo, was awarded the Best Small Town Award and received €5,000. The other eight short-listed towns received €1,000 grants and certificates of merit to acknowledge “their own impressive performances in reaching out to visitors and creating the best possible tourism experiences”.

Minister of State for Tourism and Sport Mich ael Ring said Kilkenny had displayed “a relentless fo- cus” on welcoming tourists.

The finalists were chosen following a long-listing process where 45 towns were chosen for assessment. Independent assessors and a team of “secret shoppers” visited each town to measure their tourism performance and the level of welcome to visitors.

Marian Keyes: ‘What doesn’t kill us makes us funnier’
6

Alfre Woodard: ‘I love coming to Ireland, but we’re the pariahs now’
7