Jungle talk influences - from Bowie to Grand Theft Auto and beyond

Jungle talk a good game, know all about playing smoke and mirrors – and have the album of the season to prove it. We're ‘an escape from those ideals of what people think bands should be all about’ says Josh Lloyd-Watson 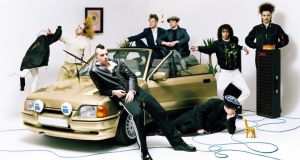 Josh Lloyd-Watson: ‘I don’t want to look at my own album sleeve and see my own face’

There will always a place at the table for bands who can talk a good game. On the phone from Seattle on a day off on a recent US tour, Josh Lloyd-Watson strikes you as a man who knows his way around a good quote or two.

That’s a relief, because the signs from the past few months weren’t great about his band. Jungle seemed to be just another act in thrall to the current fad of groups spending too much time and effort ensuring that the public doesn’t know who they are. Most people don’t seem to care, so putting an emphasis on intrigue and subterfuge by not appearing in photos or videos is more annoying than anything else.

When the smoke cleared, it turned out that Lloyd-Watson and his Jungle partner, Tom McFarland, were formerly with Mercury-signed Britpop revivalists Born Blonde. They’re now better known for their Jungle connections; so much for the disguise.

However, as Lloyd-Watson points out, they were never going to stay hidden. “It was never about remaining anonymous because we were always going to play the live shows. We didn’t want to get a reputation for hiding or being mysterious; we wanted to create something other than us to look at in the live shows and the videos. I don’t want to look at my own album sleeve and see my own face – just as I didn’t want the usual band shots where the band are standing against a wall.

“Look at Damon Albarn with Gorillaz, for example. Think of David Bowie; that’s not even his name, it’s a creation of another world for the music to live in. You try to create something visually which is more interesting than two guys’ faces.”

Lucky for them, Jungle have the musical chops to back up those audacious comparisons. Their self-titled debut album is a beaut, all superfried funk, disco and soul fuelling a slew of feel-good, serotonin-rich pop grooves. Jungle is for blasting through open windows on sunny days and summer nights.

According to Lloyd-Watson, the album was informed more by visual than audio prompts.

“Something like Grand Theft Auto was a huge influence, but more as a concept. So many people just escape into those games, and it’s another world. You can come home from your job and escape into this world where you can roam around Los Angeles. Every track on the record is a film in itself, and they’ve all got locations. For example, The Heat is the beach, which is a metaphor for happiness, and that allows you to write in a certain way.”

The problem with bringing records into the studio, he says, is that you end up copying them. “We had listened to records in the studio before and you’d go, ‘I want to sound like this’. Two hours later you’d have a track which sounded exactly like what you’d just been listening to. It didn’t seem very honest.

“There was a time when I loved the Tame Impala record and I just wrote songs exactly like that. You listen to them and go ‘it sounds cool’, but it’s a copy. It felt much more beautiful and natural when we didn’t do that.

No walls or barriers “The best way we thought was to just go in with no preconditions and make something that sounded great. If it sounds good, you can filter out all the different opinions about good or bad. You have to trust yourself and not go in with walls or barriers. If you don’t think about it all that much, you’ll enter an instinctive creative process rather than something which is very thought out.”

The records the pair admire tend to be hip-hop records by artists such as J Dilla or Madvillain. “We wanted to make our sound sampled without using any samples or having to clear samples or go through all that. So with Busy Earnin’, we recorded it in a very DIY way and then cut it up and resampled it into new tracks. It had, like, 18 different versions, and the groove for what people hear now only came about on the last 45 seconds of this extended eight-minute edit. That song took three months all in all, but the actual song people know only took 10 minutes.”

It all makes for a record Jungle are happy with, a much different state of affairs to their time in Born Blonde.

“We learned a lot from that”, says Lloyd- Watson. “We were friends who played in that band rather than it being our band. We learned how to play in a band and do gigs, but it never got off the ground. It didn’t feel honest, and we weren’t happy because the whole thing sounded like something trying to sound like other people.”

The aim with Jungle, then, was to follow their own star. “Jungle is an escape from those ideals of what people think bands should be all about. We wanted to create something else completely. Same with the photos. We’re producers, so it feels weird to take a photo of yourself and put that up. The music industry expects that and the press expects that, but it shouldn’t be about who you are and what you like. It’s about the music, the art. The creative purity we have found is really cool.”

Lloyd-Watson is after the best of a couple of different worlds. “We want to be part of that world where you make the music and also be in the audience. One of the biggest things for us as artists is how can you listen to your own record. I want that Men in Black thing where you can erase your memory so you can listen to your record from a different perspective.”

The most important thing for Jungle is to keep their egos out of the room. Hence the photos and videos. “That’s why we call each other T and J, our nicknames when we were growing up. I want to keep Josh out of it because the day that Josh comes into the room is when the ego comes in. I always feel quite awkward about self-promotion, which is why I’m keen to stress that there are up to 20 people involved with Jungle.

“This world is about trying to be liked and that’s a Facebook thing. By inventing a like button, they have created this world where you measure and quantify your successes by how many likes you get. So it’s very easy to become obsessed by the individual ego. When that happens, you don’t get an honest free expression.

“That might sound a bit pretentious, but that’s what I believe.”