Is the selfie an act of narcissism?

‘Byron scratched his name into the supreme temple at Sounion, and compared with that a selfie is quite harmless,’ says philosopher Simon Blackburn 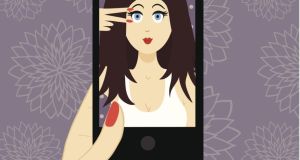 One of today’s most Orwellian inventions is surely the selfie tripod. Where once holiday-makers used to have to stop passers-by and ask for assistance with a photograph, they can now produce a 3ft-long extension to their cameraphones. In one fell swoop, you can do away with the need for human interaction and fuel your narcissistic tendencies.

This postmodernist win-win reflects a change in societal values. It’s not long ago we used to mock trigger-happy foreign tourists. Now we record, share and upload our movements as though our experiences are only validated if witnessed.

But philosopher Simon Blackburn warns that we shouldn’t be too judgmental about today’s selfie-obsessed youth. In his latest book, Mirror, Mirror: The Uses and Abuses of Self-Love, he highlights the value of having some self-regard, while citing the likes of Tony Blair and the banking profession as cautionary examples of what happens when you have too much of the quality.

From this balanced perspective, he provides today’s idea: The market economy directs us to channel our competitive spirit away from valuable pursuits to purely materialist ones.

When does self-esteem cross over into narcissism?

Simon Blackburn: “A modest degree of self-esteem is what Milton called a ‘pious and just honouring of ourselves’. It is no more than a decent self-respect. It can actually stand in the way of vanity, which is an undue concern for the admiration of others.

“The road to narcissism, or a fixated self-love, goes via conceit: if the vain person is too concerned with how he stands in the eyes of others, the conceited person has learned to ignore the others and just thrive on his own good opinion of himself. Narcissism is the fatal extreme of this.”

Is technology making us more narcissistic?

“Probably not. It gives us more opportunities: I can interrupt your life and that of dozens of others with an Instagram of my breakfast, which I couldn’t have done 10 years ago. But I think of that as having more to do with vanity – and, indeed, lack of self-confidence – than with true narcissism. And there has always been the tendency to impose oneself on the scene.

“Byron scratched his name into the supreme temple at Sounion, and compared with that a selfie is quite harmless.”

What makes someone authentic?

“The idea is that what you see is what you get: the authentic self is as free of artifice as possible. The authentic is the opposite of the fake or the fraudulent. An authentic Indian meal would be one cooked a traditional way with the traditional spices and techniques, as opposed to one that cuts corners.

“An authentic Rembrandt is a picture painted by Rembrandt rather than one that just resembles his work. But it is not so easy to talk of ‘an authentic person’, since we are all, inevitably, persons rather than imitation or fake persons.”

How do you know if you’re not being true to yourself?

“This is a real can of worms. Polonius’s famous advice to his son implies that we each have a solid interior nugget of virtue, and, provided we always tap into it, we cannot be false to anyone else. But Polonius is a conventional old bore.

“Shakespeare himself is far more interested in the self that is conflicted and torn and eventually comes to ruin because of it. His heroes act with misgivings; they do not know whether what they do is right, and this complexity, of course, is precisely why they are so interesting and recognisable.”

What do you make of footballers who peel off their jerseys after scoring? Should they be scorned for showing off their sculpted bodies?

“Fortunately they do not often cross my horizon. But I might be inclined to take a lenient view. I regard pride as the pleasure one takes in something supposedly good about oneself. The poor footballer (using the adjective in its spiritual, not its financial sense) has probably had to spend hours in the gym getting to be like that, so I can see that it might be natural to want to show off the result.”

You quote Adam Smith saying our mistake is to admire the rich or great instead of the virtuous and the useful. How much does commerce influence our perception of value?

“Rousseau called amour-propre the restless spirit of competition, along with vanity, and, of course, envy of others who seem to be beating us. Commercial society channels amour-propre away from wanting to excel in valuable fields and into a simple race to accumulate wealth and its trappings. Smith is right that it turns us away from virtue and into the superficial, worthless, and eventually unsatisfying treadmill of consumption.

“I was told this week that the London store Selfridges is to spend £300 million [€380 million] on a revamp to double the space it gives to selling luxury handbags. I think philosophy has a job to do to make that kind of thing seem either ludicrous or wicked.”

Do you ever take ‘selfies’?

“I am afraid I do not have a smart enough cellphone. Alas, I do quite like to see myself 10 years ago in front of the Taj Mahal or whatever. But it’s nicer if it was a family photo, or a group of friends, because then the picture activates happy and innocent memories.”

Question: Any advice for the last-minute holiday planner?

Lao Tzu replies: “A good traveller has no fixed plans and is not intent on arriving.”

Unthinkable is now on holidays