Names from theatre, film and literature star in a video to promote Ireland as part of the launch of new online portal, ireland.ie. Video: Creative Ireland 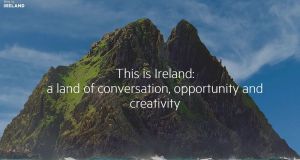 A homepage image from Ireland.ie

www.Ireland. ie is an initiative of the Creative Ireland Programme, announced by the Government last December with the aim of placing culture and creativity at the centre of public policy.

Speaking at an event during his St Patrick’s Day visit to the US capital, the Taoiseach described the new site as “a gateway to discovery of who we are, what we believe and what we do”.

“Our culture speaks to the essence of who we are, a culture of storytelling and learning, of artistic endeavour, pride in heritage, and a never-satisfied curiosity about the world around us,” he said. “We are peacekeepers and peace-makers. We believe in culture as a basis for personal and collective wellbeing.”

Mr Kenny said that through the Creative Ireland Programme, the Government would nurture and invest in the creativity and imagination of our people, strengthen and empower our communities and create the space for ideas and innovation to flourish and grow.

“Ireland.ie states confidently and proudly that Ireland is a great place to live, to work, to invest in, do business with, and to study,” he said.

Speaking from Sweden, Minister for Arts Heather Humphreys said it was appropriate the website was being launched by the Taoiseach this week in Washington, at a time when Government ministers were promoting Irish culture around the world.

“Ireland’s culture and creativity gives us our edge, and Creative Ireland seeks to promote and encourage that both at home and abroad,” said Ms Humphreys.

While the Government’s primary focus with Creative Ireland was facilitating greater cultural participation at home, she said, the global element of the programme was also very important.