‘Room’, ‘Sing Street’ and ‘My Name is Emily’ lead nominations in excellent year for Irish film 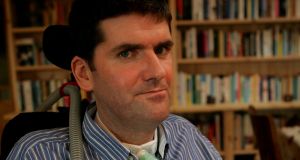 Simon Fitzmaurice directed ‘My Name is Emily’ – a crowd-funded production – from a wheelchair, while struggling with the symptoms of motor neurone disease. File photograph: Cyril Byrne/The Irish Times

An extraordinary awards season for the domestic film industry comes to a close on Saturday night with the Irish Film and Television Academy (Ifta) Awards at the Mansion House in Dublin.

John Crowley’s Brooklyn and Lenny Abrahamson’s Room, both nominated for best picture at the Oscars, are among those jockeying for statuettes, but they will face serious competition from two more recent releases: John Carney’s Sing Street and Simon Fitzmaurice’s My Name is Emily.

Room, Sing Street and My Name is Emily all have eight nominations. Brooklyn and Paddy Breathnach’s Viva both score seven mentions. All these films have achieved remarkable things.

Fitzmaurice directed My Name is Emily – a crowd-funded production – from a wheelchair, while struggling with the symptoms of motor neurone disease.

Carney’s lovely Sing Street, a musical set in 1980s Dublin, has been surging at the Irish box office since its release last month. Viva, set among drag artists in Cuba, reached the long-list of nine for the best foreign language feature Oscar (though sadly did not make the final five).

Robert Walpole, veteran producer of Viva, has attended many Ifta ceremonies and accepts that this year is a bit different.

“That is a world class line-up of films,” he told The Irish Times. “Without blowing our own trumpet, I think any country around the world looking at that would think: boy, what a line-up of movies. We have a mature industry and we should be very proud.”

Two years ago, the Ifta ceremony was much criticised after the show, then broadcast on RTÉ, seriously overran and background conversation could be heard during the acceptance speeches.

RTÉ later announced that it would not screen the ceremony in 2015 and entered into consultations with The Irish Film Board concerning future productions.

The academy decided, however, to split the ceremony in two and bring it to TV3. Saturday’s ceremony, honouring TV drama and film, will be broadcast on Sunday night on that station. A ceremony honouring the rest of the television industry will take place later in the year.

“IFB worked with RTÉ on their review of the production of the Irish Film and Television Awards ceremony last year. This year the ceremony will be broadcast on TV3. We will continue to review this process over the next year,” The Irish Film Board, which continues to provide funding for the awards, told The Irish Times.

Last year’s ceremony, not broadcast live, was a great deal shorter and neater. “I was at the one that caused the rethink and it did need a rethink,” Walpole said. “The people at Ifta would recognise that and I think they did a very good job. There is a lot of outside interest this year.”

Liam Neeson will be at the ceremony to receive the Ifta Outstanding Contribution to Cinema Award. President Michael D Higgins will present the statuette and tributes are expected from the likes of Martin Scorsese and Steven Spielberg.

The actress and producer Roma Downey will receive the inaugural Irish Diaspora Award, presented in partnership with the Ministry of Diaspora Affairs. Though not quite as well known as Neeson, Downey, raised in Derry, has had a distinguished career in Hollywood. She came to fame playing the title character on the show Touched by an Angel and went on to become president of the “faith” TV production company Lightworkers Media. Downey has been listed as one of Variety magazine’s “100 most powerful women in Europe”.

The star performer in the TV section has been TG4’s Irish-language western An Klondike. The series, which, in edited form, was also released as a feature film, secured nine nominations, beating the divisive RTÉ series Rebellion into second spot with eight.

Comedian and actress Deirdre O’Kane will host a ceremony that is expected to welcome presenters such as Chris O’Dowd, Amy Huberman, Andrew Scott and Natalie Dormer.

Benjamin Cleary, who won an Oscar in February for his short Stutterer, is among the nominees at this home fixture.