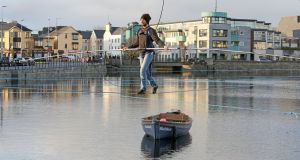 Galway Community Circus training in 2017 at the Claddagh Basin for Wires Crossed - A Balancing act for Europe, one of the key projects of Galway 2020. Photograph: Joe O’Shaughnessy

This summer 400 high-wire performers will cross the river Corrib in Galway in a 34-hour world record attempt aimed at reclaiming the watercourse from its association with suicide.

There is just one problem: 150 Irish-trained participants may have to pull out because, unlike participants from mainland Europe, they cannot find insurance.

The €1.3 million Wires Crossed – A Balancing Act for Europe event is part of Galway’s European Capital of Culture 2020 programme. It is 1½ years in the making and funded by both the European Union and the State. But it is set to become a purely foreign affair.

Many of those hoping to begin training in March for the June event have experienced mental health issues.

The Galway Community Circus youth organisation, which is behind the planning, says if it cannot secure sufficient insurance cover by the end of February those hoping to brave the high-wire challenge will simply not have had enough time to prepare.

“One of our main issues is that we usually have an aerial troupe who train here and they currently can’t train because one of the conditions [of the current insurance policy] is that we have to be [at a maximum height of] 1.5m or below,” explained spokeswoman Dani Gill. “At the moment it’s not a high wire.”

Even though their performers use safety harnesses, ongoing efforts to upgrade their insurance cover to apply to a greater height have proved fruitless. Entreaties to various Ministers only prompted uniform responses regarding ongoing Government efforts to tackle wider insurance issues.

In the meantime, the Wires Crossed event, which is partnered with the Pieta House and Jigsaw charities, may end up having only overseas performers who have their own, cheaper insurance cover.

“The reason it’s at the [Corrib] river is because of the mental health issue,” explained Ms Gill, noting “everyone is very aware of the river and the loss of life”.

She said they wanted to reclaim the space with a message of hope: “one step at a time”.

“The irony is that if we don’t get cover, all of our guests from Europe will be able to cross the river but our [Irish participants] will not.”

In its 18-year history, Galway Community Circus has trained thousands of young people in circus arts as “an educational tool for personal, artistic, social and community development”. It has 650 weekly members.

June’s scheduled event aims to have 400 high-wire participants of all ages cross the river Corrib and adjacent Claddagh basin over a period of 2,020 minutes (33 hours and 40 minutes) and through the night.

In a statement, a spokeswoman said the Government was aware of the issues facing cultural festivals and venues and was concerned about the affordability and availability of insurance.

Mairéad Dewar: ‘To be able to do something like that , it was a huge thing for me’

Mairéad Dewar (20) said she suffers a lot more anxiety in everyday life situations than when she steps out on a high wire.

As one of dozens of people preparing for the spectacular river Corrib crossing, the student from Galway emphasises that, just as the act of tightrope walking is beneficial to mental health, June’s event is important in promoting the broader issue. If it goes ahead.

Like many of those currently training or getting ready to train, Ms Dewar has grappled with her own mental health, facing panic attacks as a teenager and then anxiety. She has already completed a trial crossing of the Claddagh basin which sits alongside the river.

“For someone who struggles with anxiety in everyday situations, to be able to do something like that . . . it was a huge thing for me and I think it will be a huge thing for a lot of people.”

Lauren Trainor (35) has also had to contend with mental health issues specifically depression and then anxiety. The latter particularly following the death of her grandfather two years ago. She has also crossed the basin in a trial run last year.

“It was like something clicked in my head, that I have done the scariest thing you can imagine and now what’s there to be scared of? Now I’m not scared of having anxiety or depression any more,” she said.

“You can have all the support about you, like you do with depression, but you [alone] have to take that step.”

The Corrib was envisioned as the site of a high-wire crossing event when a number of years ago there was a particularly high rate of suicides there. The association is painful for many people and those involved say it is about taking it back.

“It would be absolutely crushing,” Ms Trainor said of the prospect that Irish-trained performers may not be able to take part.

“I think it would be very successful in raising awareness for mental health. How could it not; people on a high wire crossing one of the fastest-flowing rivers in Europe.”