The Times We Lived In. Published: September 5th, 1997. Photograph by Alan Betson 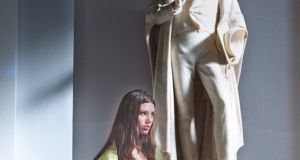 “Just turn your shoulder a little to the right, my dear. Head up. Now, turn your knee out, like this. Ah, yes. You know, I think that lower back pain of yours just might be work-related …”

Today’s photo – which I think of in my head as “Silk and Stone” – is a delightful juxtaposition of a living, breathing person with an artificial entity. But which is which? There are those who would argue that the wafer-thin fashion model is more of a social construct than a real person. Meanwhile the statue in the picture, for all its marble pallor, is uncommonly life-like.

The glorious ensemble is designed by Bríd Nihill, and the model is showing it off to perfection. The inch-perfect curve of her waist and hips, accentuated by the plumb-straight wrap at her back, is in itself something of a work of art.

The picture was taken at the College of Physicians, and the marble man is Sir Henry Marsh, a Galway-born doctor who served as president of the college four times in the 1840s. This famously gentle and kindly individual began his working life as a surgeon but had to change career after losing part of his right index finger during an operation.

For reasons best known to himself, the sculptor, John Henry Foley, decided to restore Marsh’s missing digit. He also portrayed Marsh in his presidential robe, in a pose as relaxed as if he were talking to one of his students.

Did our photographer ask the model to mirror the statue’s pose? We could easily ask him. But let’s assume instead that it was the other way round. That so infectious was Canavans’s sashaying catwalk dance, that the statue was moved to copy her. Art imitating life, as it were.

Has your phone secretly recorded your conversations? Mine has
9