Time to recall Thomas Davis’s ‘republic of virtue’ once again, as we mark his bicentenary

Opinion: Though culturally a Protestant, Davis was religiously indifferent, perhaps causing him to underestimate the strength of sectarian passion in Ireland 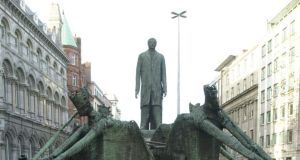 ‘Those who aspired to build a free and thriving Ireland must not dishonour the cause, as Thomas Davis’s own verse puts it, “by passions vain and lowly”.’ Above, the Thomas Davis Memorial on College Green, Dublin by Edward Delaney. Photograph: Frank Miller

The bicentenary of the birth of Thomas Davis (he was christened on October 27th, 1814) isn’t causing much of a stir, except among his loyal admirers in his native town of Mallow.

One would have thought that the sadly romantic story – an early death at 31, a grieving fiancée – would have a perennial appeal. But there are no annual processions in Davis’s honour, no wreath-layings or orations, no daily flowers on the grave from besotted fans. Scarlatina cannot compete with the morbid glamour of the scaffold and the ambush.

A noble sentiment, but naive, since it played down the fundamental sources of conflict in Irish history, religion and land. Though culturally a Protestant, Davis was religiously indifferent, perhaps causing him to underestimate the strength of sectarian passion in Ireland and to involve him in the wishful thinking that “Orange and Green would carry the day”.

“Gentlemen, you have a country”, he reminded his fellow Protestants who, however, had no intention of sharing that country (and foregoing their ascendancy) with an untrustworthy, recently emancipated majority. Davis never gave up on his passionate appeals to his co-religionists – “tis a sad thing to find Ulster Protestants ill-affected to Irish freedom.” His crusade was futile, but herculean and its nobility cannot be gainsaid.

A Nation Once Again

In various maxims which were to have a wide currency before and after independence (“a people without a language of its own is only half a nation”), Davis eloquently advocated – in English – the speaking of Irish, a language in which he remained unskilled.

The historian JC Beckett dismissed Davis with faint praise – “this attractive, able but ineffective young man”. He deserves much better than that. “Educate that you may be free” is an inspiring concept for the age, recalling Kant’s great definition of “enlightenment” as “man’s emergence from his self-insured immaturity”. Davis’s argument against religiously segregated education has yet to be heeded in Ireland. “Let those who insist on separate education, let them prohibit Catholic and Protestant boys from playing or talking or walking together... let them rail each sect into a separate quarter.”

WB Yeats praised Davis for being “empty of peacock talent”; he “put money in no man’s pocket, his achievements were of a moral nature”. Davis himself, in the manner of a 21st century moralist denouncing the materialism of the market economy, deplored “this thing, call it Yankeeism or Englishism, which measures prosperity by exchangeable value, measures duty by gain, and limits desires to food, clothes and respectability”. Our esteemed President could not have put it better!

Davis espoused the notion of “the republic of virtue”. Those who aspired to build a free and thriving Ireland must not dishonour the cause, as his own verse puts it, “by passions vain and lowly”. Indeed, what redeems his best-known patriotic song from bombast is the high virtuous sentiment: “for freedom comes from God’s right hand, and needs a godly train / And righteous men must make our land a nation once again.”

Finally, since Davis admired Wordsworth, it is appropriate to adapt the English poet’s famous apostrophe:

“Davis, thou shouldst be living at this hour! Ireland hath need of thee.”

John A Murphy is Emeritus professor of Irish history, UCC