The Thomas MacDonagh papers: ‘I devoted myself too much to national work’

Thomas MacDonagh worried about his family not having enough money, during his life and after his death, letters held by the National Library suggest

20,000 digitised documents relating to the 1916 leaders are available at the NLI. This video looks at Thomas MacDonagh with one of the most touching aspects of his archive relating to the relationship with his family. Video: Bryan O'Brien

A photograph in the collection of the National Library of Ireland shows a happy couple and their newborn child in early 1913. This staged portrait – only the middle classes could afford to pay a studio photographer – is particularly poignant when one considers the parents’ fate. Within four years Thomas MacDonagh and his wife, Muriel Gifford, were dead; the baby boy in the photograph and his sister, who was born later, were orphaned.

MacDonagh, one of the seven signatories to the Proclamation of the Irish Republic, was executed for his part in the Easter Rising. A year later his wife drowned in a swimming accident off Skerries, in north Co Dublin, leaving four-year-old Donagh and one-year-old Barbara.

The photograph has signs of MacDonagh’s nationalism: he’s wearing a Tara brooch and a traditional Irish costume. This poet, academic, actor, teacher, union organiser and soldier was also a family man.

MacDonagh had proposed to Gifford , in October 1911, in a light-hearted “Testament of Intentions”, in which he described himself as a “bachelor of arts and artfulness, being in a state of perfect poverty and health (barring a slight cold)”. His “set intention” is to “wed, marry and spouse the said Lady”.

MacDonagh married Gifford the following year. (Gifford’s sister Grace, incidentally, married Joseph Mary Plunkett, another signatory to the Proclamation, the night before he was executed.) MacDonagh was from a well-off family by the standards of the time – his parents were teachers – but the Giffords were wealthy Protestants who lived in a 10-room house in Rathmines.

Letters suggest that, before they married, MacDonagh fretted about being able to keep his wife in the style to which she had become accustomed. Gifford responded emphatically. 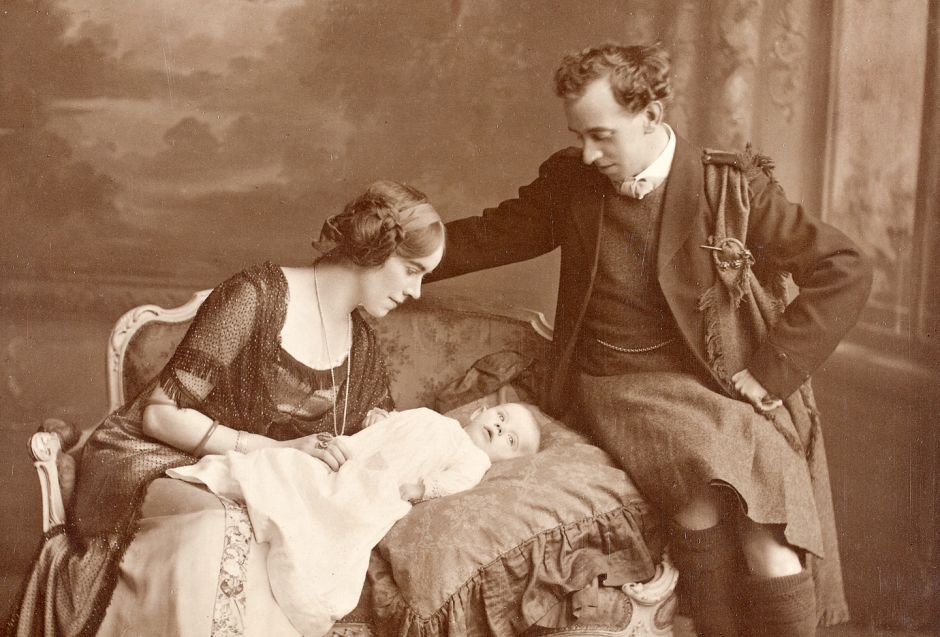 “I adore you my love, and if you were actually destitute, I would a million times rather tramp with you than marry the wealthiest man in the world – you do know that darling don’t you?” she wrote. “So please, please dearest don’t talk of my making any sacrifice – I only wish to Heaven that I was clever so that I could be some sort of help to you and a better match for you. My heart is yours to do what you like with it – to keep it or to trample on it, no matter what happens I can never love anyone else.”

The couple fussed over their adored son, known as Don, who would go on to be a judge and a playwright. He showed an early ability at writing, for he could have been no more than three when he apparently wrote: “Dear Daddy, I was a very good boy when you were out. Your loving little boy, Don xxxxxxxxxx”. (As the library notes, Muriel may well have written this.) His father writes to him half in English and half in Irish. “Conas atá tú. How do you do?”

The child is not always well behaved, though. “The Don was a bad boy in the tram coming back. I won’t tell you what kind of badness but you may guess,” Muriel wrote to her husband in October 1914. I feel terribly lonely and blank without you darlin . . . While I am writing this the boy is wandering around the floor and singing a little song with Dadda as the refrain.”

There is also a letter from MacDonagh to his baby daughter, Barbara, saying that he is concerned she is not sleeping. It was intended for Muriel: “I am troubled to know that you have been crying a whole long day, and that poor Mamma gets so little sleep.”

There is also an innocent postcard that Muriel sent Donagh shortly before she drowned, on July 9th, 1917: “Dearest Don, I had a lovely big swim today and nearly got out to the island. I’ll have some lovely seaweed and shells when we go back. Love and million of pops from Babilly and Murielly”.

MacDonagh was the commandant in the Jacob’s biscuit factory during Easter Week. He was executed on May 3rd, 1916.

The original of his last letter home is not in the National Library of Ireland’s collection, but it does have a copy. In it MacDonagh laments that his death will leave his family in poor circumstances.

“The one bitterness that death has for me is the separation it brings from my beloved wife Muriel, and my beloved children, Donagh and Barbara. My country will then treat them as wards, I hope. I have devoted myself too much to national work and too little to the making of money to leave them a competence. God help them and support them, and give them a happy and prosperous life.”

Thomas MacDonagh’s letters will be available from Monday at catalogue.nli.ie

Cormac Ó hEadhra, usually an irresistible force, is stopped by an immovable bureaucrat

Frank of Ireland: If you like toilet humour, you’ll love Brian and Domhnall Gleeson’s new comedy

I Can See Your Voice: Is this the show where celebs drop acid and see what happens?

The Movie Quiz: What is Switzerland’s only contribution to world culture, according to Harry Lime?