A sign dating back to World War 2 has been restored in Dalkey, 83 of the signs were built during the war, five of which now remain. 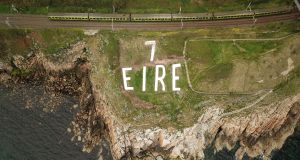 At Hawk Cliff in Dalkey, surrounded by prime real estate on one of south Co Dublin’s nicest coasts, it’s hiding in plain view. Just duck off Vico Road, down a little path towards the sea, over a pedestrian bridge above the train track, around the corner, and ... it hits you, breaking the natural landscape of cliff and sea in its stark and startling statement: “EIRE.” Above it is a huge number “7”.

Lying flat on rough ground facing the sea are four capital letters, each as long as a medium-sized back garden, and spelling out the seldom used official name of the Irish State in our first national language. The letters are made of small irregular granite stones, held firm within in mortar, and painted brilliant white. It is enormous – about 30m wide and 12m from top to bottom.

The backstory of this giant “Éire” sign includes local military history, an insight into Ireland’s knife-edge neutrality during the second World War, a local detective story, and an enormous voluntary effort to restore this strategic landmark from another time.

“Nothing like this has been done elsewhere in Ireland. None of the ‘Éire’ signs have been comprehensively studied, excavated and restored like this to wartime condition,” claims Michael Kennedy, historian at the Royal Irish Academy, who has mentored Dalkey Tidy Towns’ ambitious project as historical adviser. (Volunteer teams have restored similar signs in locations including Bray Head in Co Wicklow, Loop Head in Co Clare, and Malin Head in Co Donegal.)

“This was the border of the war, at the frontline of our defence,” during a period of hostile threat to Ireland. It fits, he says, into “a wider-geopolitical perspective behind the signs, which runs from neutral Ireland’s frontline soldiers via the US embassy – which requested the construction of the ‘Éire’ signs – to Eisenhower’s plans for D-Day.”

It all started about five years ago, when Kennedy met Des Burke-Kennedy, a member of Dalkey Tidy Towns, which was restoring – with support from Dún Laoghaire Rathdown County Council – a second World War searchlight base at the summit of the nearby Sorrento Park, which was a base for Army coastwatchers scrutinising sea and sky 24/7 during the war. Burke-Kennedy has an evocative photo of those coastwatchers on duty.

The base is now ringed with red bricks (the searchlight is long gone), and beside it are the foundations of the small look out post (LOP) hut where soldiers and volunteers recorded all air and sea movements during 1939-45 in a Day Book, now in military archives at Cathal Brugha Barracks in Dublin. An anti-aircraft gun’s exact location is now unknown.

This was LOP No 7, one of more than 80 such lookouts placed roughly every 10 miles along Ireland’s coast. These were critical to our neutral state during the war, when invasion was a real possibility. Somewhere near each LOP was an enormous white “EIRE” in the landscape, built by the Irish Army in 1943-44 to warn “belligerent aircraft” this was Ireland, and neutral territory.

The signs were critical for US aircraft to avoid landing here. When they did so, accidentally, they were looked after and escorted to the Border, in contrast to German airmen, who were interned in the Curragh

As described in Kennedy’s book Guarding Neutral Ireland, they were especially critical for US aircraft, having crossed the Atlantic, to get their bearings, and avoid landing here. When they did so, accidentally, they were looked after and escorted to the Border, in contrast to German airmen, who were interned in the Curragh.

The set-up was an indicator of our brand of neutrality – delicate, risky, and not entirely even-handed. (Then Chief-of-Staff of the Defence Forces Lt Gen Daniel McKenna is said to have asked “who am I neutral against?”)

The LOP numbers were added later, turning the aerial markers into navigation aids and telling pilots exactly where they were. The Allies had maps with numbers (now in US national archives in Washington DC); the Germans did not.

Today, most of the “Éire” signs have been covered by the landscape, and only five or so are clearly visible from the air, including Loop Head and Malin Head. The Bray Head sign was exposed in 2018 following a fire on the hill during the summer heatwave and the stones were subsequently cleaned up and painted.

The Dalkey sign – some eight miles up the coast from Bray – could have been anywhere in the area. For about five years both Michael Kennedy and Des Burke-Kennedy were on the lookout. “You’re looking at the landscape for a sign – it’s got to be here somewhere.”

The breakthrough came in autumn 2018 when local woman Orla de Cogan showed Burke-Kennedy an aerial black and white 1940s-50s photograph of the area that hung in her parents’ house for years. Looking closely, there was a hint of what could have been letters at Hawk Cliff. It was somewhere to start, and they set out with spade and archaeology stick, poking at the ground. Amazingly, they found stones on day one. They were part of the “R”.

The “Éire” sign was covered by about 30cm of “muck and vegetation”, and slowly the letters emerged from decades of being swallowed by the earth. Dalkey Tidy Towns got to work, excavating about 1,000 tonnes of granite stones from the trenches in the ground, cleaned and placed them back in position.

For six months Burke-Kennedy’s “Team Tuesday” crew worked on it. “There were people lying all over the place on the ground,” he says. A weekend blitz in March involved 60 people and seven wheelbarrows in convoy from the road.

Roadstone gave advice on using four tons of its Flo Mix, a kind of binding agent, and Sika Paints provided 175 litres of a hardwearing paint to render the finished letters in brilliant white, as they would have been during the war.

Crews of workers from AIB, US Bancorp and Hedderman Financial Solutions, volunteering as part of the companies’ social corporate responsibility remit, blitzed some heavy work. “There were people with their FitBits working out how intense the calorie burn was, hauling wheelbarrows up and down!” he says. In all he calculates there were 1,692 hours of volunteer work onsite.

As passers-by came across the project, word spread, and others came to see. “There has been huge local interest. Over the Christmas break Des was giving a running commentary to passers-by on what we were up to,” says Kennedy.

An information sign is planned, to include the names of LOP7’s Corporal Charles Craney and his coastwatcher team who built the “Éire” sign in 1944, in honour of their memory and achievement: Corporals James Dalton and Henry Mullen, and volunteers Thomas Smiles, Samuel Williams, Vincent Delaney, Alfred Hill, John Mooney, Nicholas Kinsella, John Larkin and James Smith.

For this year’s D-Day anniversary, he hopes to organise a lecture and dedication ceremony onsite, inviting relatives of LOP No 7.

As we stand this week on the spot where those coastwatchers built this enormous sign 80 years ago, Kennedy says: “It’s part of the hidden history of World War II in Co Dublin, a monument to the Emergency in Ireland.”