The National Library of Ireland’s digitised archive on Patrick Pearse reflects his life as a politician, a revolutionary, an innovative educator, a family man and a poet. Video: Bryan O'Brien 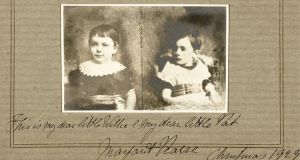 Patrick Pearse as a child: Patrick (right) with his brother. Their mother, Margaret, inscribed the photograph: “This is my dear little Willie and my dear little Pat.” Photograph courtesy of the National Library of Ireland

None of the signatories to the Proclamation of the Irish Republic is better known or more mythologised than Patrick Pearse. He has been called many things: a hero, a visionary, a saint and a sinner. Successive generations have applied to him their visions of what a revolutionary leader should or should not be. He provokes strong emotions. His complex and often contradictory personality has been analysed and reanalysed, yet nobody can offer a definitive view of who he really was.

The personal papers that the National Library of Ireland is releasing online contain many of his best-known writings. There is his court-martial address, in which he resigned himself to being executed but hoped that he would be the only one. He pleaded in vain for Britain to “show itself magnanimous enough to accept my single life in forfeiture and to give a general amnesty to the brave men and boys who have fought at my bidding”.

The collection also includes his prophetic poem The Mother, which includes the lines:

I do not grudge them: Lord, I do not grudge
My two strong sons that I have seen go out
To break their strength and die, they and a few,
In bloody protest for a glorious thing

Alongside this are many photographs of Pearse. One is signed by his mother, Margaret, at Christmas in 1929. It shows him with his brother – both were executed – when they were children; Margaret’s message says, “This is my dear little Willie and my dear little Pat.”

Pearse was very conscious of having a squint, and preferred to be photographed from the side. Even here, if only by coincidence, he looks away from the camera. 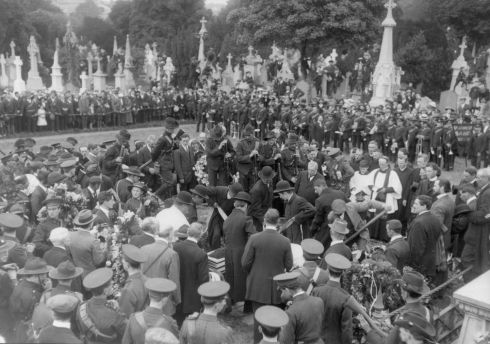 In later life Pearse was planning how to liberate his country. His vision of how Ireland could be included the type of education that he was experimenting with at St Enda’s College, the school he set up; keeping it open was a constant strain on his morale and time.

Not all his neighbours were enamoured by Pearse’s educational experiment, an alternative form of schooling emphasising Gaelic culture, which began in 1908.

“I am again compelled to remonstrate at the annoyance I am put to owing to the want of control exercised by you over the lads attending your school,” one irate neighbour wrote to him in 1910. He continued: “I was forced to conclude that the assurances of relief which I had from a lady whom I met at your house, when I called to complain of trespass . . . and your own promise to my wife when she complained to you, are not be considered as sincere.”

The neighbour had complained that one of Pearse’s pupils had again trespassed in his garden. When he told the pupil to take another route to school, he wrote, the pupil responded “with a language and a demeanour towards my wife which I prefer not to describe (at least not now)”.

In the run-up to the Rising Pearse was continually fighting off creditors, and he feared on many occasions that St Enda’s would be bankrupted. A faded and torn letter from 1912 depicts an unnamed creditor who writes to him. “I agree not to take proceedings against you personally or against St Enda’s before 31st Aug, 1913, in respect of the debt due to me or to press for payment of same before same date if X (illegible) in the pound is paid me as first instalment before September 1st, 1912”.

Another creditor, Alex Dickson & Sons of Dawson Street, Dublin, “Rose growers to HM the King”, sent him a reminder that he had not paid a bill of £2-1-6. “As we have not yet been favoured with your remittances, we believe the matter must have escaped your notice, and we now . . . write you in the hope that you will give this matter your immediate settlement.”

The situation became so acute that Pearse wrote to the veteran Fenian Joseph McGarrity in September 1915, asking for money. It was just a few days after Pearse had made his incendiary “the fools, the fools, the fools” speech at the grave of Jeremiah O’Donovan Rossa. Pearse believed his landlords were now targeting him because of his political views.

A writ had been issued against him for £288, he believed, with a view to putting him and his school out of business.

“The second half year is only just entered and in the ordinary course they would be quite content to take a half year’s rent and give me ample time nearly six months to pay the rent. But they issued a writ for the whole amount and insist on payment,” Pearse writes.

“I have no means of meeting the claim at present and the situation is therefore that by this day week they will be able to mark judgment against me, put me in the ‘black list’ sent in sheriffs to seize the place and sell it up – compelling me to close the College.”

Pearse also appealed to Irish-Americans to help clear a $10,000 debt immediately. His school, he assured potential donors, was “modern in the best sense”, offering an education that was “wholly Irish in complexion and bilingual in method. The attempt has been a notable success,” he wrote.

“Apart from its Irish standpoint, our College is distinguished from other secondary schools and colleges in Ireland by the appeal which its ideals make to the imagination of its pupils, by its objection to the cramming system, its viva voce teaching of modern languages and, in short, its linking of the practical with the ideal at every stage of its work.

“We believe not only that we are training useful citizens for a free Ireland, but that we are kindling in our pupils something of the old spiritual and heroic enthusiasm of the Gael.”