The James Connolly papers: ‘Wasn’t it a full life? Isn’t this a good end?

‘Well, Lillie, hasn’t it been a full life and isn’t this a good end?’ the signatory to the Proclamation of the Irish Republic told his wife just before he was executed, in 1916

Some 20,000 digitised documents on the leaders of the 1916 Rising are to become available on the National Library's website. Katherine McSharry from the library discusses some of the documents on Thomas Clarke and James Connolly in the collection. 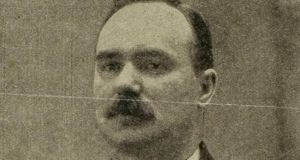 The execution of James Connolly has a particularly poignancy in the story of the Easter Rising.

He was so badly wounded in the thigh during Easter Week of 1916 that he was evacuated from the General Post Office on a stretcher. He was taken to Dublin Castle and the hospital there, then arrested and court-martialled. Isolated from the other leaders of the rebellion, Connolly had no idea what was going on or who had been executed. He was strapped to a chair by a firing squad at dawn on May 12th, 1916, in the breaker’s yard at Kilmainham Gaol.

Connolly and Seán Mac Diarmada were the last of the 15 men whom the British put to death after the rebellion. Both faced the firing squad nine days after the series of executions started, by when the killings had caused revulsion. The night before Connolly was killed the deputy leader of the Irish Parliamentary Party, John Dillon, speaking in the House of Commons, condemned the British response. “It is the first rebellion that ever took place in Ireland where you had a majority on your side . . . and now you are washing out our whole life work in a sea of blood.”

Connolly was told at midnight on May 11th that he would be executed the next morning. That evening, before he was taken to Kilmainham Gaol by ambulance to die, his wife, Lillie, and eldest daughter, Nora, visited him for the final time.

An account of what happened appears in a witness statement that Nora Connolly gave, and that is among the collection of James Connolly’s personal papers that the National Library of Irelandhas just put online, to mark the centenary of 1916. 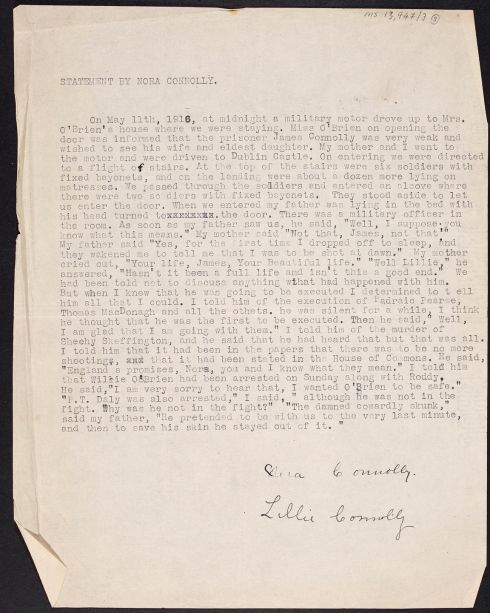 “My mother and I . . . were driven to Dublin Castle,” Nora said. “On entering we were directed to a flight of stairs. At the top of the stairs were six soldiers with fixed bayonets, and on the floor about a dozen more were lying on mattresses.

“We passed through the soldiers and entered an enclave where there were two soldiers with fixed bayonets. They stood aside to let us enter the door. When we entered my father was lying in the bed with his head turned to the door.”

It is clear from Nora’s testimony that her mother still hoped that her husband’s life might be spared. She was shocked when he told her that he was to be executed. Connolly told his wife, “Well, I suppose you know what this means.” Lillie responded, “Not that James, not that.”

Nora continued: “My father said, ‘Yes, for the first time I dropped off to sleep. And they wakened me to tell me that I was to be shot at dawn.’ ” 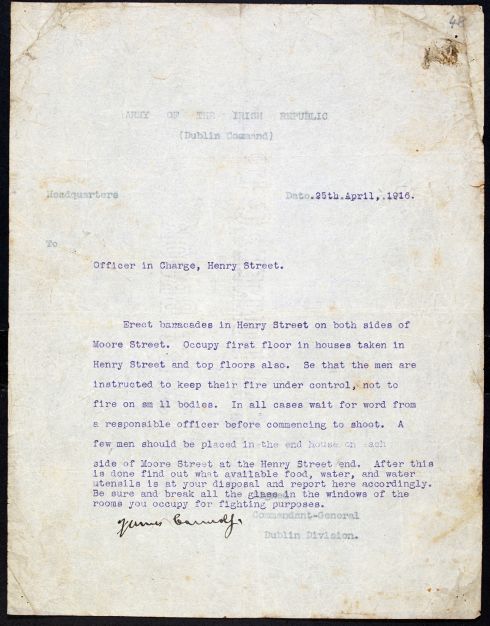 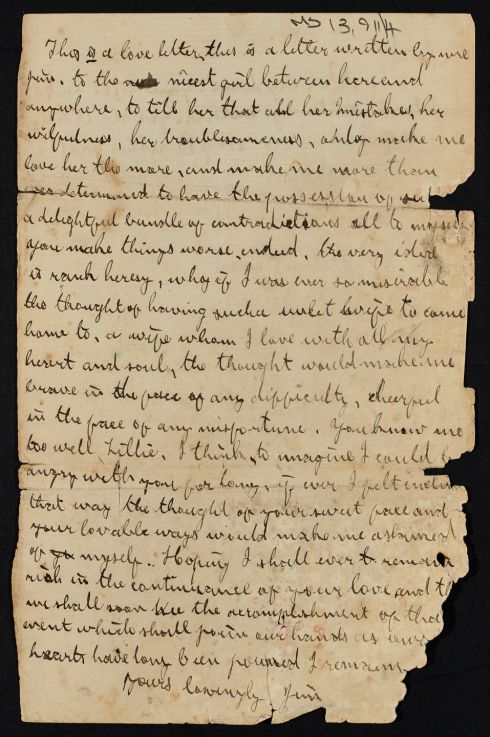 Nora told him of the executions of Patrick Pearse, Thomas MacDonagh and others. “He was silent for a while. I think he thought that he was the first to be executed. Then he said, ‘Well, I am glad that I am going with them.’ ”

Nora also told her father about the clamour to have the executions stopped. “I told him that it had been in the papers that there was to be more shootings. ‘England’s promises, Nora, you and I know what that means.’ ”

Though a prolific writer, Connolly kept very few of his own papers. Most of those that have survived were collected by his friend William O’Brien, the trade unionist.

A huge amount of correspondence relates to Connolly’s work as a union organiser and to the Irish Citizen Army; some comes from the early years of his courtship of and marriage to Lillie Reynolds.

Connolly’s leadership skills and training as a British soldier are apparent in instructions he sent during Easter Week.

“Erect barricades in Henry Street on both sides of Moore Street,” he writes to the officer in charge. “Occupy first floor in houses taken in Henry Street and top floors also. So that the men are instructed to keep their fire under control, to fire on small bodies. In all cases wait for word from a responsible officer before commencing to shoot.”

Connolly’s testy relationship with his fellow trade unionist Jim Larkin is also laid bare. In 1912, a year before the Lockout, he worried that Larkin’s overbearing nature was threatening the labour movement.

“I begin to feel that our friend Larkin has arrived at his highest elevation and that he will pull us all down with him in his fall,” Connolly wrote to a friend.

“He does not seem to want a democratic movement. He seems to want a Larkinite movement. The situation will require the most delicate handling . . . He has us at his mercy and he knows it and is using his power unscrupulously.”

In 1888, two years before their marriage, he writes to Lillie: “This is a love letter, this is a letter written by me to the nicest girl between here and anywhere to tell her that her mistakes, her wilfulness, her troublesomeness only make me love her all the more and to have possession of this delightful bundle of contradictions all to myself.”

Connolly and his wife had six children. Like Kathleen Clarke, Lillie Connolly gave her husband the fullest support for his socialist and revolutionary activities.

The National Library of Ireland’s head of digital, Katherine McSharry, says the breadth of Connolly’s activities shows what a remarkable man he was given his impoverished upbringing in Edinburgh. And “without William O’Brien’s dedicated work over decades, who knows how much of this record would have survived?”

The National Library of Ireland’s James Connolly papers are here