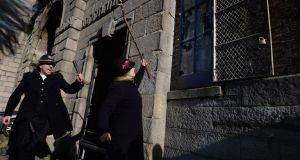 “History is just one damned thing after another,” said the historian Arnold Toynbee. Nonsense. History is lots of things happening at the same time, bumping into each other and jostling for attention. We package it up into neat parcels to teach in schools, but history is just life, looked back on. And life is complex and contradictory. Just look at any newspaper or news website today.

Perhaps that was even truer of 1918. My novel Star By Star is set between October and December. In those weeks, in Ireland, people were dealing with the end of the Great War; the influenza pandemic which killed more than 50 million worldwide, including about 20,000 in Ireland; the continuing fight for Irish independence, and women and working-class men voting for the first time.

Every one of those things could have been the focus for a book on its own. Star By Star is ‘about’ the election, but it can’t be ‘about’ that without focusing on all the other things too. And for a novelist that was quite a challenge.

So why set a book in those turbulent days of late 1918? My publishers, Little Island, had commissioned me to write about women’s suffrage, so why didn’t I concentrate on the suffragettes in their militant heyday? There’s so much potential for drama – violence, police brutality, prison, hunger strikes.

But I knew that Anna Carey’s books about Dublin teen suffragette Mollie (The Making of Mollie and Mollie on the March, O’Brien Press) were forthcoming. These books brilliantly portray the Irish suffragette movement at the height of its activity in 1912.

Star By Star would focus on the election itself, which took place on Saturday December 14th, 1918, just over a month after the end of the war, and when the flu was at its most terrible, with unburied bodies piled up, and people dropping dead in the streets.

Another challenge – how do you make an election, even such an historic one, exciting, especially for a teen reader? After all, Stella, my heroine, is 15. Only women over 30, who were householders or married to householders, could vote, which must have seemed very remote to many young women.

I asked myself: what sort of girl, in 1918, would care passionately about women voting? Answer: one whose mother was a suffragette, who had spent her childhood sewing suffrage banners and going on marches and believing she could change the world. And because it was 1918 it was easy – if cruel – for me to make that mother a victim of the flu, leaving Stella alone but determined to carry on her fight, even when she is sent to live far from the heart of the radical politics she has grown up with.

I’ve always been a feminist and especially admire the women who fought so bravely for my vote. At school in Belfast I’d learned about famous British suffragettes like the Pankhursts but little about Irishwomen like Hanna Sheehy Skeffington, and, long before her, Isabella Tod, who set up The North of Ireland Women’s Suffrage Committee in 1871.

We all know Constance Markievicz, the first woman elected to parliament, who, as a Sinn Féiner, did not take up her Westminster seat. However, I have a special soft spot for Winifred Carney, who stood as a Sinn Féin candidate in a Belfast seat she could not possibly win. I rarely write about real historical figures, but I wanted to honour Winifred’s courage, so I made one of my characters, Rose, a friend of hers with similar interests in trade unionism and republicanism as well as suffrage.

Often people assume that, unlike the passionately-engaged Stella, young people today aren’t interested in politics. But that’s not true. Look at the recent March For Our Lives demonstrations in America, or the many young Irish people involved in campaigns around the forthcoming referendum on the Eighth Amendment. These young people understand that politics isn’t about abstract ideologies; it’s about real issues that affect people’s lives.

The suffragettes knew that too: the vote was not merely a symbol of equal citizenship; women would use it to help legislate for things like equal pay, property rights and reproductive rights. Society has become much fairer since 1918, largely as a result of women having their say. I’m often asked if I hope Star By Star encourages young people to vote, and my answer is a very firm yes.

A big issue for the historical novelist is to get the details right without being boring. I can get quite geeky about research. All the references in the story to newspaper headlines are based on real papers on real dates. But I only used them when they served the story. Anniversaries such as the centenary of women’s suffrage give a story resonance because they bring the issue back into the zeitgeist, but it’s lazy to think that’s enough; if people want to read a history book, they can read a textbook. What I wanted was to write a good story, as well as to try to bring 1918 closer for my readers.

Closer but not too close: 1918 isn’t 2018, and Stella isn’t a present-day girl in a longer dress. She prides herself on being modern, but she was born in 1903, and no matter how radical her upbringing, she is coming of age in a long-ago world with old-fashioned sensibilities. I had to be true to that. The other night I was watching a 1980s’ episode of Coronation Street with my mother and I was disgusted by its sexism. Mummy argued it was “acceptable” – by which she meant widespread – in that era, and I shouldn’t take it so seriously, that “not everything is political”. I disagreed. The personal is always political. Stella understands that, but she too fights with the people around her who don’t want to accept that.

It was quite good fun to write these arguments. What was much harder was to ensure I didn’t give characters anachronistic ‘politically correct’ insights just to make them more attractive to readers. For example, I love Sandy, the ex-army captain, but I had to allow him to have attitudes I disapproved of. He’s not exactly a ‘new man’, criticising the suffragettes’ militancy and taking it for granted that women will look after him. On the other hand, I give him political opinions which might seem very modern. “I’d like countries to come together more – not split up into tiny suspicious states,” he says, but I stand by that: anyone who had spent four years on the Western Front might well have come to such conclusions. After all, the League of Nations, precursor to the United Nations, grew out of a determination not to let such carnage happen again. Also, though a unionist, Sandy’s main concern about Irish independence is that he doesn’t want more bloodshed – again, understandable in a traumatised soldier.

When we look back at Irish history, we tend to see it in black and white – or in orange and green. Of course, the truth is more complex and nuanced, and much more colourful, and that’s what I enjoyed most about bringing those difficult weeks in winter 1918 to life.

Sheena Wilkinson has won many awards for her novels and short fiction. Her most recent novel, Star By Star (Little Island) was published to commemorate the centenary of women’s suffrage

Lucky Per: Denmark’s Nobel-winning version of the Great Scandinavian Novel