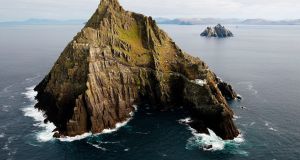 Skellig Michael: Visitor numbers rose by well over 1,000 in 2016, understood locally as due to the filming of Star Wars on the island in 2015. Photograph: Brian Lawless/PA 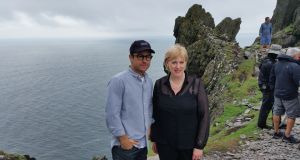 Star Wars: The Force Awakens director JJ Abrams with Minister for Arts, Heritage and the Gaeltacht Heather Humphreys on Skellig Michael during the September 2015 shoot. 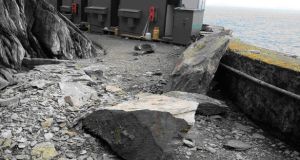 Part of the rock fall on Skellig Michael.

The Unesco world heritage site of Skellig Michael, a sixth-century monastic site, has suffered its second major rockfall in a year, and one of a handful of its most serious rockfalls in decades.

Visitor numbers to the fragile site, precariously rising over the Atlantic increased by well over 1,000 last year, and the surge in popularity is being attributed locally to the publicity surrounding the filming of Star Wars on the island in 2015.

The visitor season on the Skellig closes in October, and by mid-September the official count was already 13,500 – 1,000 up on the figure for the full 2015 tourist season.

However, senior conservation architect for Skellig Michael Grellan Rourke rejected the idea the rockfall was linked to the increase in visitor numbers or filming in the area. Mr Rourke told Radio Kerry and RTÉ’s Morning Ireland that rockfalls – even though two of the most serious there had occurred in the past two years – were a natural phenomenon.

They could be attributable to winter storm damage and weather, he also said.

The recent rockfall left a large amount of material deposited on the island’s roadway to the work area near the lighthouse, which is away from the main visitor area. The rockfall was spotted on Friday when five workmen went out to the island to prepare the island for the visitor season opening in May.

Mr Rourke said rabbit burrows may also be responsible for the instability. There had been three or four rockfalls in the 40-year span of his time working on the island, two of them in the past couple of years.

It is not clear if the opening of visitor season will be delayed – while it is hoped it will not be, the situation requires constant monitoring, Mr Rourke said.

The workmen have been brought in from the island and an assessment on the island’s safety and repair will be carried out next week.

Does religion deserve to be treated as a joke?
3

Anne Enright: ‘I looked at how men manage their confidence and took a few leads’
4

David McWilliams: ‘Ireland is three decisions away from being a perfect country’
7

Ellie Goulding: ‘I was made to feel like a sexual object’
8

The power of literature in a time of plague
9