‘Savagery and brutality of the worst kind’: stories of the Irish held in German POW camps

At least 10,000 Irishmen spent all or some of the first World War in a German camp

The Battle of Le Pilly was a short but bloody encounter which led to the destruction of a proud Irish regiment in October 1914. Video: Ronan McGreevy 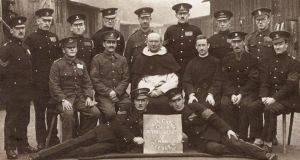 During the first World War the names of German prisoner of war camps were as familiar to many serving Irish men in the British army as were their own home towns.

Limburg, Sennelager, Zossen and Giessen were among the places where thousands of Irishmen were detained during the war.

How many in total? An exact breakdown regiment by regiment has never been done, but a conservative estimate is that at least 10,000 Irishmen spent all or some of the war in a German POW camp.

At the Battle of Le Cateau on August 26th, 1914, the Royal Dublin Fusiliers were surrounded and hundreds were taken prisoner. A similar fate befell the Connaught Rangers at Le Grand Fayt the same day when 280 were taken prisoner. The 2nd Royal Munster Fusiliers at Étreux were almost wiped out the following day when 300 men were captured. At Prémesques and Le Pilly in October, the Leinster and Royal Irish Regiments were similarly decimated when forced to surrender.

The Germans had made no provision for the tens of thousands of allied prisoners they took in the first months of the war. Conditions for prisoners in those early months were horrendous and got worse as the war progressed. Some 6,400 British army soldiers died, mostly from disease. Nevertheless, a soldier was four times more likely to die at the front than in a camp.

In a graphic letter published in the Limerick Chronicle shortly after the war, Pte William O’Connell, who was taken prisoner at Étreux, depicted the grim reality.

“No tents were erected, and we had only the blue sky above us. In hail, rain, frost and snow we were condemned to submit to this terrible ordeal,” he wrote. “During all the time the condition of the men was something awful.”

Food too was scarce – and parcels from home helped. In Kildare alone the local committee set up to look after Royal Dublin Fusiliers POWs from the county dealt with 500 men.

A fortnightly parcel would contain a tin of coffee and milk, a tin of condensed milk, 1lb of tea, 1lb of bacon and 1lb of cheese. Many POW committees in Ireland helped provide this fare, especially for impoverished families who could not afford it.

Conditions in Giessen camp appear to have been a little better. There are extant photographs of a Catholic choir and drama club within the camp. The men appear to have had plenty of leisure time. “As prison camps go, Giessen is a good one,” wrote Pte Simmons, a Canadian POW in Giessen.

“The place is well drained; the water is excellent; the sanitary conditions are good, too; the sleeping accommodations are ample, there being no upper berths such as exist in all the other camps I have seen. It is the ‘show-camp’, to which visitors are brought, who then, not having had to eat the food, write newspaper articles telling how well Germany treats her prisoners. If these people could see some of the other camps that I have seen, the articles would have to be modified.”

Conditions for the Irish POWs varied from camp to camp. Pte William O’Connell, who was held in Limburg for the duration of the war, said they encountered “savagery and brutality of the worst kind” and many Irishmen died from starvation.

A cross was erected at Limburg to the Irish POWs. It stands there to this day and was restored in 2007. The names of 45 Irish POWs who died at the camp are inscribed on it. Two, Pte Patrick Moran of the Connaught Rangers and William Devlin of the Royal Munster Fusiliers, had been shot by prison guards.

By the start of 1915 there were 2,200 Irish prisoners in Limburg camp alone. They were concentrated there for a special purpose: Roger Casement had approached the German government about raising an Irish brigade from Irish POWs. The brigade would fight against the British and be the vanguard of an invading army which would liberate Ireland from British rule, Casement told the prisoners.

Today the name of Casement is revered in Ireland, but in early 1915 he was regarded by the Irish prisoners as a crank and nuisance. One Irish officer Corporal Thompson (no first name) of the Kings Own Yorkshire Light Infantry told him: “In addition to being Irish Catholics, we have the honour to be British soldiers”. The officer was quoted in Dawn in Ireland by Marie Harrison in 1917.

Documents recently released by the National Archives in London show the fiercely hostile reaction accorded to Casement in Limburg. Many of the men were asked to join an army which had killed or wounded their comrades. The Germans improved conditions in an attempt to persuade the men to join up, but the Irish POWs had already made up their minds.

Casement visited the camps in early 1915 claiming to be the “right-hand man of the Kaiser”. According to an account by Pte John Cronin from Co Cork, the men were furious when Casement denounced John Redmond as a “traitor” and the Home Rule Bill as a “pretence”.

“As soon as the men realised who he was and what was his aim, they set upon him, and he was only saved by the German sentries from serious injury.”

The men’s spiritual needs were met by Fr Thomas J Crotty, a Dominican priest from Kilkenny who was sent by the Vatican to minister to allied POWs in German camps. The Germans had hoped he would use his spiritual office to persuade the men to join the Irish brigade. He did the opposite, telling the men they had taken an oath under god to King George V and could not break it. O’Connell commented: “We who experienced the fiendish work of the Germans know what we are talking about and only for our highly esteemed and beloved chaplain, the Rev TJ Crotty OP, many more of us would leave our shattered frames in German soil today.”

In the end only 55 men in the entire Limburg camp signed up despite all the blandishments offered by the Germans. Pte James Wilson from Dublin succinctly summed up their opposition. “Irishmen despise the Germans and would cut their throats if they had the chance”.

After Casement was executed following the 1916 Rising, his sister Nina took up the cause on his behalf and began to visit Irish POWs in the camps. She wrote a letter in The Continental Times, the British POW newspaper, giving an account of the Rising and its aftermath. She urged the men to join the Irish brigade, but to no avail.