From Great War to a more intimate one

For many countries, Ireland included, 1919 marked the end of one conflict and the beginning of another

On the 18th of January 1919 countries from across the world came to Paris to discuss the settlement terms of the first World War and build what they hoped would be lasting peace. Video: Ronan McGreevy/ Enda O'Dowd 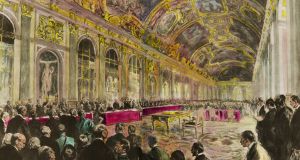 Engraving. The Versailles Conference in the Hall of Mirrors of the Palace of Versailles, June 28th, 1919. President Clemenceau opens the session. Private Collection. (Photo by: Christophel Fine Art/UIG via Getty Images)

The world emerged from the first World War in 1919 broken and bleeding, but determined to build a better future.

The hopes of that better future were invested in the Paris Peace Conference, which dominated the first half of 1919. The high-minded sentiments expressed by US president Woodrow Wilson – that the world would be made safe for democracy, that self-determination would be a central principle, and that there would be no vengeance – were confounded by the desire on the part of the victorious allies to get revenge for their terrible losses by blaming Germany for the Great War.

The Treaty of Versailles was regarded retrospectively as harsh on Germany, but no harsher than the peace imposed on Soviet Russia by Germany in early 1918.

The end of the first World War did not mean the end of conflicts. The remaking of the map of Europe stirred up old enmities and created new ones. For many countries, Ireland included, 1919 marked the end of one conflict and the beginning of another.

On January 21st the first Dáil met in the Mansion House and the Soloheadbeg ambush was sprung in Tipperary. The timing was coincidental and the ambush was widely condemned even in republican circles.

The setting-up of a parallel parliament with a parallel government financed by the Dáil loan was an extraordinarily risky and visionary act by those who would go on to found the new state.

Yet it marked a twin-track strategy, which would intensify over the following 2½ years. Irish freedom was pursued, to adapt a more modern slogan, with a Mauser in one hand and a ballot box in the other.

First and foremost, though, the Irish sought to pursue independence through peaceful, democratic means. This often-overlooked fact goes a long way to explain how democracy took root very quickly in the Free State.

The War of Independence was in its early stages less a war adn more a series of isolated skirmishes. It need not have progressed beyond that point.

The response of the British authorities to violent episodes was to take it out on the whole people – effectively introducing martial law in many counties. British policy gradually led to the alienation of even those who wished to retain the status quo for the sake of peace.

The proscribing of Dáil Éireann in September 1919, despite it being elected by the people, was an affront to the democratic values Britain purported to hold dear.

The escalation of the War of Independence that occurred in 1920 and 1921 could have been avoided had the mandate given to Sinn Féin at the 1918 general election been respected. “Ourselves alone” aptly summed up the sense of isolation felt by the Irish in 1919.