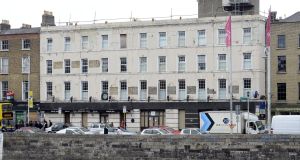 A fresh attempt is being made to demolish and redevelop Dublin’s Ormond Hotel, a prominent Liffey quayside property that closed down more than a decade ago.

The hotel, which features in James Joyce’s Ulysses, was bought by developer Bernard McNamara in 2006 for €17 million, a year after it closed.

He put it on the market in 2009 with a price tag of €7 million, but it was subsequently bought by Monteco Holdings for less than €2.5 million.

Monteco, a company connected to Queens Park Rangers owner Tony Fernandes, in 2013 applied for permission to demolish the Victorian hotel and replace it will a a 170-bedroom six-storey hotel at a cost expected to be in the region of €20 million.

Dublin City Council refused permission, as did An Bord Pleanála on appeal.

The board described the scheme as “monolithic” and “unsympathetic”, and likely to “seriously injure” the character of a conservation area.

Monteco is now revisiting its bid to develop a hotel on the site and has applied to the council for a five-storey hotel with 121 bedrooms.

Although a more modest scheme than its previous proposal, the new hotel would still have twice the number of bedrooms as the old Ormond Hotel and would still involve its demolition.

Also, as with the previous application, the new development would involve adding adjoining buildings – numbers 12 an 13 Ormond Quay, both of which are protected structures – to the hotel complex.

While the application proposes the full demolition of the existing hotel building, it seeks to refurbish the Georgian buildings at 12 and 13, and convert the ground floor of number 12 into a bar.

The Ormond Hotel opened in 1889, but was rebuilt, with the demolition of original houses, in 1900.

It was the setting for the “Sirens” episode of Ulysses and featured in a film based on the book in the 1960s.

The original hotel was based in number eight Ormond Quay, but expanded into number nine around the turn of the century, and into numbers 10 and 11 by 1933.

In the 1970s, the hotel was expanded into number seven, with no further expansion along the quay since.

Although their façades were remodelled in the 19th century, both numbers 12 and 13 date from the 18th century, and retain some original features.

While number 12 is in reasonable structural condition, number 13 was assessed as being in extremely poor condition at the time of the previous application.

Ormond Quay was reclaimed from the Liffey in about 1675 by Sir Humphrey Jervis.

Naoise Dolan’s Exciting Times to be adapted for TV
7