Irish bog bodies ‘may have been victims of climate change’ 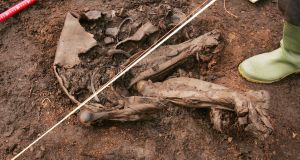 The bog body in the Bord Na Mona Cashel Bog, in Co. Laois found by machine operator Jason Phelan in 2011. The body is estimated to be over 2000 years old , possibly that of a human sacrifice, found deposited in a leather bag. Photograph: Alan Betson/The Irish Times

He may have been among the first victims of climate change, sacrificed because of changing weather patterns 4,000 years ago.

Cashel man, so named because of his discovery in a bog in Cashel, Co Laois in 2011, is the oldest bog body in the world and one of about 300 found in North West Europe.

His life, death and the reasons for it are the subject of a BBC 4 documentary tonight entitled ‘4,000 year-old Cold Case: The body in the Bog’.

It follows a two-year forensic examination by a team of international scientists and archaeologists, including State pathologist Marie Cassidy.

Historians differ on the reasons for their deaths but the link between them all is the evidence of ritual and very violent murder.

The programme examines the theory of team leader and keeper of antiquities at the National Museum Ned Kelly that Cashel man was a pre-historic king, killed by his followers to appease the deities because of bad harvests.

Scientists and archaeologists involved in the investigation discovered through scans and other high tech tests that Cashel man had a protein-rich diet of meat, dairy and cereals indicating a person of high social status.

There is a relatively huge volume of very early literary material, unlike other countries where Celts lived, and the writings of monks highlighted stories of high kings being sacrificed.

All three were buried at the foot of inauguration hills, where hill and bog mark the boundaries of ancient kingdoms. Far more was done to the men than was needed to kill them.

“The more violent the killing, the more valuable the sacrifice” to appease the gods, according to Mr Kelly.

A one-metre depth of peat can yield 1,000 years of history and analysis of fossilised amoebas by wetlands archaeologist Dr Ben Geary of UCC reveals a shift to a wetter, colder environment during the Bronze/Iron Age, where rainfall increased and weather cooled.

For pre-historic tribes it was a disaster, destroying the harvest and leaving the community facing starvation.

Their solution, according to the theory is to kill the king, appease the gods and hope for a better harvest - an early response to climate change.