More than 1,200 Irish soldiers died fighting for villages during Battle of the Somme

The Battle of Guillemont, which occurred on September 3rd 1916, has been remembered with the creation of a scale model, currently on display in King House, Boyle, Co. Roscommon. 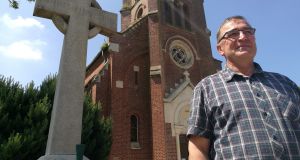 Mayor of Guillemont Didier Samain in front of the granite cross memorial to the 16th (Irish) Division in the village.

There have been many Irish visitors to the little French village of Guillemont over the years but none gave its long-time mayor Didier Samain more satisfaction than the visit of Ian Paisley 10 years ago.

Then first minister of Northern Ireland, Mr Paisley got out of his car, broke the habit of a lifetime and entered the Catholic Church in the village.

This village and its neighbour Ginchy, a kilometre away, are soaked in Irish blood. More than 1,200 men from the 16th (Irish) Division were killed in the liberation of these two villages on September 3rd and 9th during the Battle of the Somme 100 years ago.

The defence of Guillemont by the Germans was judged by the British official history as the finest of the whole war. By the time the Irish arrived there in August 1916, the place was a ghastly spectacle. The German author Ernst Junger, who fought there, remembered years later that you could know the outlines of the village by the colour of the soil which was white after the buildings had been ground to powder.

Even today there is ample evidence of the terrible events of 100 years ago. Everywhere you see “silent pickets”, which held barbed wire in place.

There are also the remains of deep underground German bunkers so extensive that it was cheaper to leave them in place than remove them.

The Minister for Arts, Heritage, Regional, Rural and Gaeltacht Affairs Heather Humphreys will be among the hundreds of guests in Guillemont on Saturday along with the Secretary of State for Northern Ireland James Brokenshire and French cabinet minister Pascale Boistard.

Humphreys was in Guillemont for the commemorations to mark the first day of the Battle of the Somme in July.

On Saturday she will honour Thomas Hughes from Castleblayney, Co Monaghan, who won the Victoria Cross at the Battle of Guillemont, one of two Irish men to do so.

Hughes was a 29-year-old unemployed farm labourer who joined the Connaught Rangers in 1915 and was given Britain’s highest military honour for single-handedly taking out a German machine-gun post. He was wounded in the leg and never walked properly again.

At the other end of the social scale, Lieut John Holland, the son of a vet from Athy, Co Kildare, and a former pupil of Clongowes Wood College, won his cross for organising a bombing party by the 7th Leinsters on the German lines.

On her previous visit, Humphreys was introduced to Guillemont’s oldest resident, a 95-year-old man who was born just five years after the Irish liberated the village. The mayor pointed out that the family of the man wife’s were evacuated from Guillemont during the war and only returned after it was over. There are many families like that in Guillemont, but others never came back.

In 1926 the granite cross memorial to the 16th (Irish) Division, which stands outside the church was consecrated. On that day villagers hung out a banner saying Vive l’Irlande. Marshal Joseph Joffre, the saviour of France and the hero of the Battle of the Somme in the early part of the war, was present. The Bishop of Amiens told his Irish guests that Ireland and France were “sisters in sorrow”, but Ireland was already embarking on the act of national amnesia that would see places such as Guillemont fade from the collective memory.

Samain said he intends to decorate the village “in an Irish style” for the centenary on Saturday. Volunteers have spent the last few months refurbishing the church which is the centrepoint of the village as it has no cafe, bar or shop.

The church already remembers the Irish through the plaques on the wall inside and the church benches.

The names of all the Irish who died in capturing the village will be read out and the streets will be decorated with little crosses, each with a name.

There will also be the unveiling of a memorial to a largely forgotten aspect of the Irish story, the Channel Islanders who joined the 16th (Irish) Division because of the friendships they had forged with the Royal Irish Regiment which had been stationed on Guernsey.

“Guillemont is a tiny, gentle village with a lovely ambience,” the mayor says. “We like to live here. The Irish did not just liberate Guillemont and Ginchy. It is thanks to them that we live here.”

The Battle of Guillemont is also being remembered closer to home in a new diorama commissioned by the Connaught Rangers Association and created by Boyle Men’s Shed in Co Roscommon.

The scale model depicts the battle from the perspective of the 6th Connaught Rangers, one of the battalions that attacked Guillemont that day.

The labour of love took four months to create. The hand painting of the 600 figurines took 250 hours alone.

The scale model is based on trench maps of the time, photographs and visits to map the terrain.

It features the incident in which Hughes won his Victoria Cross and also the death of the regiment’s commanding officer Lieut Col John Lenox Conyngham who was killed before his men went over the top, most probably by friendly fire.

It is part of a series of diorama which Boyle’s Men Shed is creating each year to mark an event involving the Irish in the first World War.

It is available to view in King House in Boyle.