Prefer plain English? Galway will be Ireland’s European Capital of Culture for 2020 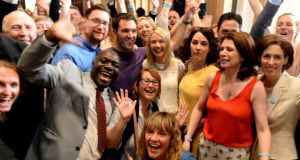 Ecoc? Say what? Ecoc stands for European Capital of Culture. And Galway has just won the title for 2020.

Wow, so Galway is up there with Athens, Paris, Florence, Madrid and, dare I say it, Dublin? Yes, those, plus Guimarães, Sibiu, Maribor and Umeå. They are in Portugal, Romania, Slovenia and Sweden. Actually, Galway’s going to be sharing the year with Rijeka, in Croatia.

Does it make me uncultured if I’ve never heard of those other ones? Not really. Since 2004 the EU has been picking cities based on their potential for transformation as much as the cultural stuff.

Stop, you’re giving me a headache That’s nothing to how the teams at Galway, Limerick and the Three Sisters cities are feeling. They’ve been working on this for more than a year, and have spent upwards of €500,000 each on their bids.

But wasn’t Limerick the culture capital already? That’s an easy mistake. Limerick was the first Irish Culture Capital, in 2014.

Ah, so maybe the runners-up can be the next ones of those? Possibly not. The Department of Arts says that there won’t be another one for a while: “So as not to dilute the importance of the European Capital of Culture in 2020,” says the Minister, Heather Humphreys.

Back to Galway, then. Does it now get millions of euro from Europe? Not exactly. The EU “prize” is €1.5 million, and the Irish public sector is pitching in €39 million (including €15 million from the Government and €12 million from local councils). The private sector is adding €6.75 million to the pot. But there are other EU funds they can apply to. They’ll have to, because Galway’s budget is €45.75 million. And don’t forget those synergies and socioeconomic . . .

Enough about those, please. What wowed the judges? As well as seeing the city in full swing for Galway International Arts Festival this week, they met an impromptu group of swimmers playing a pop-up piano on Salthill prom, and were sent on their way by a flash mob of more 1,000 doing the Icelandic football clap.

What happens next? If experience is anything to go by, everyone starts in-fighting and complaining about elitism, mismanagement and exclusion. In Limerick the artistic director and two other organisers left at the start of the year, but that’s par for the course. In Cork 2004 they had barely started when the Where’s Me Culture Group set up to complain about being left out. In fact, of seven European cities between 2008 and 2010, only one director stayed for the duration.

Hey, wait, I’ve just thought about Brexit. Will we ever see another UK capital of culture? Good point. They’re meant to get the designation in 2023: it’s between Bristol, Dundee, Leeds and Milton Keynes. But if I were them I wouldn’t be holding my breath. There is a bright spot on the horizon for English culture vultures: they’re having their own culture capital again next year, so if you want to head where the action is, book tickets to Hull.