‘The dragons of the past have not died and were only sleeping. Recent events have stirred them’ – George (AE) Russell 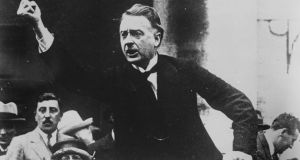 William Thomas Cosgrave (1880-1965), Irish politician, at the time of the fights for independence. Photograph: Getty Images 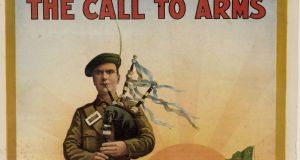 ‘The call to arms’, 1916. Irish recruiting poster. A piper rallies the troops as an Irish wolfhound looks on. Courtesy of the National Library of Ireland. 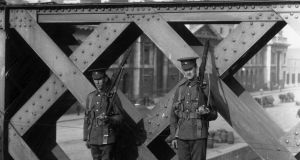 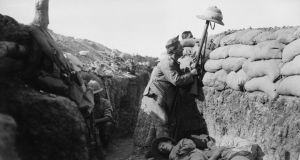 Gallipoli 1915, A Royal Irish Fusilier at Gallipoli in 1915, attempts to draw the fire of a Turkish sniper to reveal his position, circa 1915. Photograph: Getty Images

Six months to the Rising, to that defining moment in our history. And in an Ireland preoccupied with the first World War, there were, in truth, few signs of what was to come. Historian Diarmaid Ferriter cites one of them, George (AE) Russell, and his unease and feeling in a letter to a friend that we “are going to have one more heart-searching trial . . . and that within the next few years”. Below the surface AE senses that old dragons are stirring one more time.

But the signs were mostly completely misread and ignored at the time, not least by the British and its representative in Ireland Augustine Birrell, blamed later for the “growing lawlessness that went unchecked”.

Dragons Stirring, the latest – eighth – supplement in our “Century” series, dedicated to commemorating the decade of revolution from 1912 to 1922, is an attempt to capture that moment just months ahead of Easter 1916 and the preoccupations of the main actors, the society and the setting in which they moved. They include the constitutional nationalist leaders, like Redmond, the revolutionaries of the IRB, setting a date and beginning to plan, the women, trade unionists, the British, the people of Dublin . . . And the reality of a war, the “locomotive of history”, that dominated everything, and was, as Ronan McGreevy writes, not going well.

Ferriter recalls the beginnings of a psychological transition in the late months of 1915 in perceptions of that war. WT Cosgrave would write of how the earlier revolutionaries had despaired that in supporting the war “the Irish people had recognised themselves as part of England”, but there was also that strong sense among the few of England’s difficulty and Ireland’s opportunity. A time to strike back.

It’s easy in retrospect to forget that Redmond’s calculation that he could guarantee the post-war home rule he had been promised by pledging support for the British war effort had won him the support of 90 per cent of the Irish Volunteers many of whom flocked to join up in defence , as they saw it, of small nations.

It would not be growing nationalist sentiment that would gradually disillusion them, and the broadly supportive population back home in the course of 1915, but the conduct of the war, the trenches, Gallipoli, and the mounting toll of dead. And the threat of conscription.

Chris Dooley, author of a fine new study, Redmond: A Life Undone, traces the latter’s growing difficulties with Asquith over the conduct of the war while Richard McElligott writes about the republican leadership of the IRB as it begins to plan for insurrection. WJ McCormack tracks the emergence from relative obscurity of Pádraig Pearse, from headmaster and cultural activist to military leader.

Therese Moriarty describes how the war begins to change the place of women at work but also their preoccupation with it – both in support and opposition, while Maurice Walsh writes about how many Dubliners found refuge in the work of that new international star, Charlie Chaplin, and about the succés fou of erstwhile world boxing champion Jack Jonhson. Pádraig Yeates finds in the police files of the time a glimpse at another, seamier side of the city.

In previous national commemorations of 1916, and notably that in 1966, there has been, running through them implicitly, a single, dominant narrative of the Rising as the culmination, logical and inevitable, of the course of Irish history, and of the men and women who rose as the only true heirs of that history. That perspective, as Michael Laffan observes in a survey of the historical writing on 1916, has evolved and become more nuanced in recent years; more contested and more inclusive.

The commemorations next year have been deliberately placed by the Government in that broader context, in part undoubtedly to prevent Sinn Féin from successfully appropriating the mantle of true heirs. But also in an acknowledgment that it is possible and right (without repudiating Easter 1916, as John Bruton might have us do) to embrace in that history of the State – in its official narrative and iconography – the interrupted constitutional tradition of John Redmond, labour’s and women’s own struggles, the sacrifice of the forgotten thousands who fought as they saw it, and died, for small nations, and even the counter-revolutionary tradition of the unionist mobilisation and Carson.

Not in celebration or glorification, but in commemoration that may honour their sacrifices, however misguided we see them now, in an attempt to understand and appreciate the rich tapestry that is this nation. That is the only basis, in the long-term, for reconciliation.

In Stirring Dragons I hope we have helped to cast the events that led to Easter Week not as part of a single continuum, or as an uninterrupted thread of Irish history, but as the convergence of multiple, cascading streams of our history and that of Europe. Streams that would build on each other, amplifying and undermining each other like the waves building a perfect storm, for that week which would be the moment in which modern Ireland was born.

At school with a serial killer: growing up with Jeffrey Dahmer
7