Comma chameleon: An Irishman’s Diary about the sometimes fatal effects of punctuation

A comma and Roger Casement’s fate 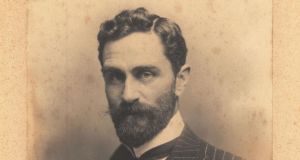 Roger Casement: did his fate hang on a comma?

A favourite joke among grammarians concerns the fate of an unnamed grandmother if, in the phrase “Let’s eat, grandma”, the comma should be carelessly omitted. But we don’t have to resort to the prospect of grand-matricidal cannibalism to find instances where commas might be a life-or-death matter. Legal history has provided at least one actual precedent.

When Roger Casement was sentenced to death in 1916, the case relied on a centuries-old law, the Treason Act of 1351. The crucial section therein spoke of persons being “adherent to the king’s enemies in his realm, aiding and giving them comfort in the realm or elsewhere”.

And the prosecution argued that the “or elsewhere” applied to both parts of that sentence, meaning that for Casement to have adhered to the king’s enemies anywhere (in his case Germany), not just in the realm, was treasonous.

The defence did not, in any case, rely on the comma’s absence. It was also argued that there was historic context for their preferred interpretation. Namely that, in 1351, King Edward III’s subjects included men who had dual allegiances by virtue of owning land in France as well as England.

These barons were anxious that perceived loyalties in France should not leave their English possessions open to forfeit. The law reflected their concerns. Hence, said Casement’s lawyers, all prosecutions for treason back then had been for actions “in the realm” only.

None of which saved the defendant. I’m not sure it was a comma that did for him, strictly speaking – the crown might have found a way regardless. But the role of punctuation in Casement’s fate was still reverberating 50 years ago, in February 1965, when his remains were repatriated.

It was by then, as an Irish Times editorial said, an entirely academic argument: “Whether he was in any technical sense a traitor, hanged on the placing of commas [or] whether he was an Irish patriot has long been decided by the Irish people,” declared the paper, in posthumous acquittal.

I was reminded of his case by a column in the latest issue of the Spectator magazine, which laments the relentless rise in recent time of another kind of comma – the so-called “weak” or “splice” variety, as used to separate clauses that should really be separate sentences.

The Spectator writer – female – gives an example from a recent “typical mother-to-mother email”, viz: “Thanks so much for helping out yesterday, Jamie had a great time with you all, thanks also for bringing his games kit home, let me know if you need me to help tomorrow...xx”.

But she also cites the increasing incidence of the virus in public signage – eg “in fire emergency do not use elevator, use exit stairs”. And while blaming the habit on email, texting, and people under 45, in that order, she also suggests an interesting psychological explanation – that the comma proliferation arises in part from “a fear of the full stop”.

Not a legal or visceral fear, of course – just an unease, especially when writing in a hurry, at being seen to make the definitive assertions a full stop might imply. Hence all the “gentle, liberal, unassertive” commas in emails and texts, followed by the dot-dot-dot endings, as if the sender is indicating that none of the foregoing should be taken as final or unqualified.

Mind you, the writer herself concedes, even Shakespeare resorted to the splice comma on occasion.

She gives the example that, in its earliest published versions, the most famous soliloquy of his most famous play read as follows: “To be, or not to be, that is the question.” Only in more recent times have editors taking to inserting something stronger before the second “be” – usually a dash or colon.

So I don’t know. To suggest that all the weak commas stem from fear of assertion might be reading too much into the casual habits of the texting generation. And either way, there’s not much riding on the issue usually. But in any case, it reminded me of poor old Roger Casement, martyr to grammar – who may or may not have been “hanged on a comma” but was certainly sentenced to a full stop.