Brian Ború remembered 1,000 years on as Clontarf gets ready for re-enactments 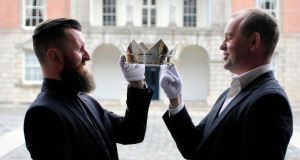 
A thousand years after he died on Good Friday at the Battle of Clontarf, Brian Boru’s place in the ancestral affections of Irish people will be revived this weekend.

The passing millennium has never dimmed those affections, not with Ireland’s history of colonial subjugation that followed in the centuries after his victory over the Vikings at the Battle of Clontarf.

Some 600 re-enactors from all over the world will be attending the event in Clontarf from as far apart as the US, Canada Australia and New Zealand.

“For our lifetime, this is it, this is the big one,” said Barry Gaynor of the Fingal Living History Society, who is organising the event.


Festival
Yesterday, St Anne’s Park in Raheny, where the Brian Boru festival will take place, resembled a cross between a hippy commune and a heavy metal festival with a lot of bearded men walking around in linen tunics and chainmail.

The re-enactors have camped out in the park for the weekend and 400 will take part in the twice daily re-enactments tomorrow and Sunday.

Everything is checked for authenticity and those swords and shields are heavy. “You could have asked to do this before we started drinking,” said one breathless re-enactor after yet another charge for the cameras.

The re-enactments, which will happen at 1pm and 4pm, will be the centrepiece of the Battle of Clontarf Festival hosted by Dublin City Council.

Separately, in the rather grander surroundings of Dublin Castle, the Brian Boru millennium crown was unveiled yesterday to the public.

Not-for-profit cancer research group Jewels for Cures commissioned Da Capo jewellers to make a replica of the crown which Brian Boru wore as high king of Ireland. It was made with donated jewellery.


Prince Albert
Among those who contributed were Lord Inchiquin O’Briain, the 32nd direct descendant of Brian Boru, Sir Michael Smurfit and Prince Albert of Monaco.

Cancer survivor Alison McCormick, who set up Jewels for Cures, secured it for Ireland and it goes on display in Dublin Castle after today for a week.

The original crown was supposed to have been given by Brian Boru’s son Donnchad to the pope 50 years after the Battle of Clontarf. What happened to it after that is not known although it may have been given to the British monarchy.

This morning the Dublin city arts office will unveil a piece of music which will be performed by a solo uilleann piper on Clontarf promenade at midday.

Composed by Sandie Purcell, it will be performed by Mark Redmond, thereby kicking off the weekend’s millennium commemoration events.

Dublin City Council’s arts officer Ray Yeates, said: “In this commission, the excitement, terror and sadness of the Battle of Clontarf are reimagined by the composer as a series of musical movements in an attempt to recapture and reflect on one of the most important events in Dublin’s history.”

*This article was edited on Friday, April 18th.