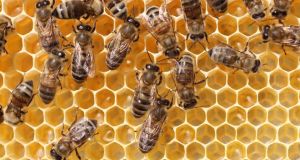 I’m sure my grandfather would have admired bees, with their famous work ethic and productivity. But I still have to wonder about the feasibility of sharing his sleeping quarters with them.

I learned recently that my namesake grandfather, a man I never met, used to keep a beehive in his bedroom. He didn’t put it there, apparently. The bees just took up residence, without consulting him, in a recess behind a window shutter. Then he left them there, apart from collecting rent at regular intervals.

How this was done exactly, I can’t say. I only heard the story at Christmas from my cousin Molly, his granddaughter by a first marriage, who did know him. In fact, she used to call to the house for honey occasionally. But as to the full details of the operation, sad to say, I’ll never know now.

I was visiting Molly in hospital, having been warned she wasn’t well. And we had so much to catch up on that the story of the bees somehow escaped full interrogation. In fact, at one point, reminding me that there weren’t many of her generation left to remember these things, she told me I should be “writing this down”.

So before rushing away – it was late Christmas Eve – I solemnly promised to revisit in January, this time with a notebook. But alas, when we met again, last week, it was at her funeral. She was buried on Saturday in Carrickmacross, a town that, during almost six decades away from it, she had never really left.

Now I can only wonder at some of the gaps in that hospital conversation, including the logistical challenges of having a beehive in a bedroom, and harvesting the honey without mishap.

From the other things I know about my grandfather, it’s plausible that he would have tolerated such house-guests. He was a farmer who lived through hard times, when every laying hen counted. And as a member of various local authorities, he was always demanding value on behalf of the ratepayers.

So I’m sure he would have admired bees, with their famous work ethic and productivity. But I still have to wonder about the feasibility of sharing his sleeping quarters with them.

The problem would be extracting the honey. Sure, you can take it out through the roof of the hive. But the bees would come out then too. And assuming you survived the initial onslaught, you would then have to abandon the room for several hours while they settled back in again.

On the other hand, I’m told of anecdotal evidence that honey bees used to be more docile than they are today. Moreover, most hardcore beekeepers don’t mind a few stings on fingers, once the face is covered with a veil. So I suppose that, even as a casual apiarist, my grandfather could have managed. He may also have used smoke to sedate the bees, as professionals do.

This is a cunning trick. Smelling smoke, the insects think there’s a fire, so they prepare for the emergency by gorging themselves on the honey. And as with the rest of us when we gorge, this makes them sluggish. The smoke should be cool, from smouldering material rather than a fire. Other than that, it can be produced by almost anything – grass, pine cones, jute sacking, etc.

Perhaps even tobacco would work. I imagine my grandfather subduing the bees with puffs from his pipe, although, actually, I don’t even know if he smoked. His only son, my father, certainly did. As a result, my six siblings and I all grew up in a haze of Mick McQuaid ready-rubbed, which might explain a lot. These days, as a harassed father of three, I often wonder how my parents dealt with seven. But no doubt children, like honey bees, were more docile back then. And the smoke probably helped sedate us.

Anyway, maybe there are veteran beekeepers out there who know of other cases where hives were kept in bedrooms. If it’s proven feasible, I might even try it myself.

In the meantime, the story recalls something a cute Kerryman once told me, “Never own anything that eats while you sleep”. We were in Puck Fair at the time, where he was selling ponies that in a weak moment, years earlier, he’d bought for his daughter.

And I could see his point about bloodstock. But there’d be no such problem with bees. On the contrary, if you could work out safe cohabitation arrangements, it might be quite reassuring to sleep alongside a 24-hour honey factory, and be woken every morning by the hum of industry.