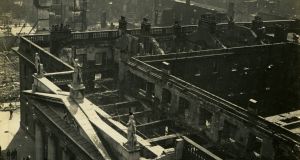 Awaiting reconstruction: ruins of the GPO in May 1916. Photograph: Thomas Johnson Westropp

Letters to Editor, ‘The Irish Times’

Sir – I have three grown-up daughters, three servants, and a house, the rent of which I am put to the pin of my collar to pay. My eldest daughter works at a munitions factory. She has to be there at 6 am, and the servants have to get up in time to call her and to get her tea. The work she does all day is of a simple, manual kind, the equivalent of cleaning stair-rods. The other two girls attend later at the same place to prepare and serve meals for those engaged in the factory.

Now, if we were to discharge the three servants, and if the girls were to do at home what they do in the factory, there would be three persons permanently liberated for productive work, an all-round economy of labour, and our rent difficulty would be solved. Curiously, this simple settlement of a question at present presenting itself to many seems to have occurred to nobody. What is wrong about it? I enclose my card. If you publish it, I shall get it hot. – Yours, etc., “Tub Straight Road”

An editorial was supportive: “We confess that we can find no flaw in this argument. Without seeking to disparage the magnificent work that educated women are doing in the war factories, in the hospitals, and in the sewing-rooms, we suspect that a good many of these ladies would be just as well, if not better, employed at home . . . Patriotism, like charity, begins at home.”

Michael Fewer, author and architectural historian, gives an illustrated lecture on State architect TJ Byrne’s work in the reconstruction of the GPO, the Four Courts and the Custom House, rescuing them from the damage they suffered in the 1916 Rising or the Civil War. Today, at 6.30pm in the Helen Roe Theatre, Royal Society of Antiquaries of Ireland, 63 Merrion Square, Dublin. Admission €10 (€5 students).