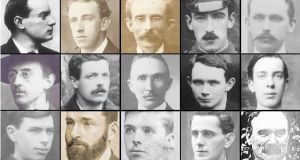 To mark the centenary of the 1916 Rising, Ancestry. ie has worked with the British National Archives, Kew, London, to bring wider online access to one of the most important contemporary Irish record collections.

The Field General Courts Martial records were recorded in Richmond Barracks in Dublin, under the watchful eye of British army officer Gen John Maxwell and tell first-hand exactly what happened behind closed doors during the court cases that were, until recent years, shrouded in mystery.

The court cases took place in chamber, in utmost secrecy, without a jury or media involvement and the only information the wider public in Ireland received about the events inside the barracks often came from the priest serving the last rights to those about to be executed.

For seven years, the records remained hidden away in Dublin and then, during the aftermath of the Civil War in 1922, the secret documents were taken to England and held by the War Office in London. Under the Public Records Act of 1958, the Field General Courts Martial records were transferred to the National Archives, Kew (or the Public Records Office as it was then called) for long-term storage and preservation.

Almost every page of the collection is stamped with the word “Secret”. However, there was a time that the British prime minister of the time, Herbert Henry Asquith, considered releasing the documents to the public.

Irish Nationalist MPs, who held seats in the House of Commons in London, called for the release of the Field General Courts Martial records on several occasions during the months following the executions. They argued the executions were not justified under the Army Act nor under Defence of the Realm legislation and called to see the documents. On June 1st, July 10th and October 24th, 1916, Asquith indicated he would release the documents relating to the court martials. These promises, made to the likes of John Dillon of the Irish Parliamentary Party, did not materialise. The documents were destined to remain closed for a minimum of 75 years. They were finally opened to the public in two tranches, in 1999 and in 2001, following a push from the Labour government but remained in situ in the archives in London. It is likely the majority of the Irish public were not aware of the records’ existence and those who were would have had to travel to London to read them. The National Archives of Kew is a treasure trove of unique historical records.

Ancestry.ie worked with the National Archives in London to identify the most valuable records relating to the Easter Rising of 1916, as recorded by the British forces all those years ago.

An arrangement was put in place to digitise these records, including the Field General Courts Martial records as well as detailed intelligence profiles kept on those who were thought to be nationalist sympathisers.

Ancestry.ie set up its state-of-the-art scanning equipment and a highly trained team began work digitising the unique records. After months of work, the records were published online through the Ancestry.ie website.

By logging on to Ancestry.ie, the Irish public, and everyone across the globe, can now read first-hand the secret goings on of the 1916 Field General Courts Martial records. An additional benefit of the digitisation is that it future-proofs the collection by providing the archive with a digital copy of the records should the paper versions ever be lost or damaged in any way.

To commemorate the centenary of the Easter Rising and to mark the unveiling of these records to the wider public in Ireland, the collection will be available to all, for free, forever online at Ancestry.ie

Ancestry.ie, a leader in family history and consumer genomics, has invested a lot of time and effort to digitise unique collections across the world. With more than 17 billion records from around the world, you can trace your family history by using collections such as the Catholic Parish Records for Ireland, alongside the social history records, such as these Easter Rising records, to better understand the life of your ancestors.

Rhona Murray is a family historian with ancestry.ie