Áras an Uachtaráin to open for Culture Night 2016 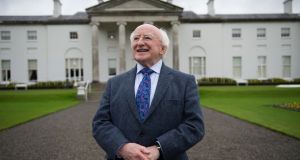 A raffle will take place to allocate a limited number of tickets which will provide entry to Áras an Uachtaráin, the presidential home of Michael D Higgins (pictured) and his wife Sabina, on Friday, 16th September to mark Culture Night. Photograph: Frank Miller/The Irish Times.

Áras an Uachtaráin will open its doors to the public as part of Culture Night 2016.

It was announced on Monday that a raffle will take place to allocate a limited number of tickets which will provide entry to the presidential home of Michael D Higgins and his wife Sabina on Friday, 16th September.

Those who gain access will be given a guided tour of the 260-year-old Phoenix Park residence, along with an insight into the history of each of the State’s nine presidents since the office was created in 1937.

There will also be performances from musicians Róisín Elsafty, Siobhán Armstrong and Ronan Browne as well as the Smashing Times Theatre Company.

Smashing Times will put on two shows: ‘Constance’ which reprises Countess Markievicz’ memories of the Easter Rising and her subsequent imprisonment, and ‘Grace and Joe’ based on the tragic marriage of Grace Gifford to Joseph Mary Plunkett shortly before the Proclamation signatory’s execution.

It is the third year in a row that the Áras has opened its doors to the public for Culture Night.

The opening of the Áras comes as part of an expanded Culture Night which will see over 1,400 venues opened for tours and performances nationwide on the night of 16th September.

People interested in attending should send their name and address to reply@president.ie, and the ticket lottery will be held early next month.