Helium is more uplifting than Oxegen 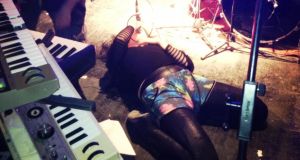 Imagine my delight when a young lady at a gig last weekend asked me which band I was playing with. What had led her to this assumption? Was I emitting an aura of detached cool? Did I have the demeanour of a misunderstood outcast who expresses societal disenchantment through the medium of screechy guitar solos? Was it an air of feckless abandon that I was broadcasting? I should have let it lie and walked away, happily imagining myself an exotic cross between Keith Richards and Seth Green, but, like a tool, I had to ask why she thought I was in a band. “Because you’re older and soberer than anyone else here.” Shit. I slunk away to address the only trait that was adjustable.

Mini-MissMarple aside, the crowd at last weekend’s Helium Festival in Ballymahon, Co Longford, were an incredibly friendly bunch. Wanderly Wagon wasn’t parked up long before the neighbours called over offering brie and crackers, as well as drop of rhubarb and blackberry vodka. Daycent neighbourhood. As much fun as there was to be had inside the walls of Helium, when the final chord was struck and fireworks exploded, the pleasant heads populating this session moved the party up to the campsite. The choons and cans continued until dawn – well, it was definitely bright anyway.

Helium is a small affair with not many more than 1,200 tickets available for the event, but what it lacks in numbers it makes up for with heart. The entire crew working on this one are voluntary and all the profits made go to Ataxia Ireland. It’d be fair to assume that a small fundraiser like this would have a pretty low-key lineup; well, you’d be as wrong as Tulisa confiding in a new found bosom-buddy. David Kitt, Kila, Mick Flannery, Fight Like Apes, O Emperor and Wallis Bird are not a bad bunch to have batting for you at any gig.


KUNG FUAIM
The Ballymahon posse enjoyed Californian conditions, while David Kitt made a few people wonder why he hasn’t become a household name. Mick Flannery had a flock of females storming the barricades to get a closer look at his lyrical content. Wallis Bird thumped out her set with all the vibrancy, dynamism and musicality that George Hook hasn’t. Ronán Ó Snodaigh threw shapes worthy of Bruce Lee with a bodhrán. MayKay writhed on the deck while The Stunning ripped up the night with that Brewing Up a Storm moment that still gets crowds da, da da da, da da da, da da da dancing. It was a good day and a great night that was only slightly sullied by some occasionally dodgy sound that thankfully didn’t detract from the overall buzz.

The joys of sleeping in a van were highlighted on Sunday morning when someone parked nearby started loudly banging out The Outhere Brothers at the ungodly hour of 11am. I released the handbrake and rolled to another neighbourhood. Bliss.


QUILT TRIP
A fondness for the quilt wasn’t confined to the post-festival sleep in Wanderly Wagon. Would you believe there was an International Quilt Festival in Galway? Yep, a quilt festival. Thousands of people made their way through quilt heaven, spread throughout the grounds of NUIG. Some of these quilt fiends travelled from Canada, the US and Mexico especially for the duvet do. I never thought I’d say this, but I actually enjoyed some of it. Some of the hung quilts were awfully impressive, with scale, detail and design that was amazing for what are essentially bedclothes. This is not the type of gear you’re likely to find in Guineys. Quilts are comforting things and even more so when I realised I wasn’t even close to being the oldest or soberest punter at this particular hanging. The quilters weren’t exactly a wild bunch; that said, they weren’t a shower of wet blankets, either.

‘It was tough . . . but I’ve stepped into a time in Irish theatre that’s really alive’
8

The True(ish) History of Ireland, by Garvan Grant
9

I came from India to Sligo, thrilled to be reciting Yeats along Lough Gill
10