Hay at Kells: And then there were three 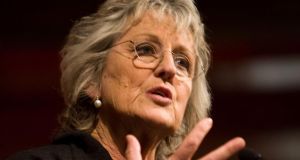 ONE minute there was nothing much happening. Then it all happened. Hay Festival Kells came into the world, accompanied by the bang-bang-bang of a trio of literary firecrackers.

Whoosh! Out of the blackness of the Breslin stage at the St Vincent de Paul Theatre blazed Lisa Dwan’s astonishing performance of Beckett’s short play Not I. Pow! From the unpromising topic Shakespeare’s Lovers, Germaine Greer fashioned a dazzling lecture which held 500 people spellbound from start to finish. Wham! Armed with nothing more than a glass of water and a copy of her memoir Why Be Happy When You Could Be Normal?, Jeanette Winterson delivered a reading which combined the timing of a stand-up comedian with the insight of a poet.

For the first day of a brand-new festival, it was impressive stuff. True, Kells has been gearing up for this for months, with many properties in the town getting a facelift courtesy of teams of volunteer painters, and pop-up secondhand and antiquarian bookshops popping up everywhere - even the butcher’s. But nobody really knew how it would all pan out. And to programme Beckett on the afternoon of the first day was to add to the uncertainty.

Lisa Dwan is a slip of an actor, and Beckett’s Not I is a slip of a play - just under 10 minutes at, as Beckett’s stage direction has it, “the speed of thought”. Or as Dwan prefers to put it, “I go like the clappers”. No matter how much you swot up about the piece in advance, no matter how eloquent Dwan’s own descriptions of her preparations for this notoriously demanding role might be, nothing could prepare you for the experience of seeing her disembodied mouth rattling and babbling eight feet above your head.

The script is a gossamer fabric woven from nothingness: random, repeated words linked by a series of dots. And yet the hypnotic rhythms of what is, effectively, a prose poem drill into the senses with the insistence of a jackhammer. “It frightens the life out of me every time,” Dwan confessed at the Q and A session afterwards. On a large screen, there was footage of her predecessor in the role of Mouth, Billie Whitelaw, who described the role as “like falling backwards into hell”.

“How pretty was the Elizabethan boy?” and “What do women want?” and “Where would you get pink fur in 1600 - and what kind of boy is it who gets pink fur on his bedgown anyhow?” were the questions being asked by Professor Germaine Greer in her lecture on boy lovers in Shakespeare.The place, to use a very non-Shakespearean word, was chocker. Greer’s talk was erudite, informative, amusing and - causing the teenage girl sitting beside me to gasp and cover her mouth with her hand on more than one occasion - unapologetically explicit.

She raged and she declaimed and she recited. She called Romeo a dork and Bertram, I think it was, a dickhead. She showed slides of Justin Bieber and Harry from One Direction so that we’d know what she meant by “beautiful boys”. She sang a snatch of a Peggy Lee song. When she invited questions, a man in the front row stood up. “No men,” she snapped. “I’m not taking the first question from a man.” She’s a legend.

Imagine being Jeanette Winterson - and having to follow that. Where would you even start? With a speech condemning consumerist culture, it turned out - followed by a virtuoso reading from her memoir of growing up with Pentecostalist adoptive parents, interspersed with nuggets of wry Manchester wit, plus the details of Mrs Winterson’s electric corset, regular Apocalypse drills (“most people have fire drills”) and the revolver in the duster drawer. “It’s definitely worth the €9.99,” she declared, waving the book at her non-consumerist audience. The more we heard her read, the harder it was to disagree.

Tiny and charming she may be, but Winterson is cut from no-nonsense female fabric. When a gentleman hogged the microphone, not to ask a question but to mount a longwinded and irrelevant defence of religion, she ordered him to let go and move on. When he wouldn’t, she invited the usher, politely but firmly, to hand the microphone to the next questioner- and the well-mannered, well-dressed Hay Festival Kells audience cheered.

“Do me a favour,” Winterson concluded. “Go home and read a poem. Or a paragraph of something that’s new to you.” By the look of the queue in the foyer afterwards, most people were happy to go to bed with a copy of her barnstorming book.

Dwan’s Beckett, with its central metaphor of childbirth, presented a woman’s scream of pain. Greer’s Shakespeare looked at youthful female desire. Winterson’s memoir offered a way to come to terms with a difficult life - with compassion and humour rather than bitterness. It was an object lesson in practical feminism: three strong women who grabbed Kells by - well, by the book.