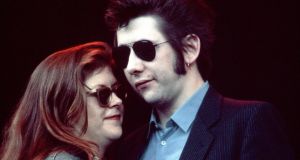 Shane MacGowan celebrates his 60th birthday today. For many, this is a modest achievement, but for this singular singer-songwriter it is remarkable on so many levels.

How did time’s arrow appear to fly so quickly? Or, perhaps more pertinently, how did he manage to make it this far? He has been a poster boy/man for self-destruction for so long that a 60th birthday seems like a minor miracle – as befitting someone happy to find solace in his take on spirituality.

But this Behan-like appetite for excess, though tempered somewhat these days following an accident, has, as with the great playwright, served to distract from his rare talent as a singer and songwriter, mainly with The Pogues, the British-Irish band he helped co-found in London almost 40 years ago.

It would be comforting to state that his torrid relationship with class-A drugs and alcohol did not impact on his work. It would also be wrong. As his songs testified and his increasingly ragged voice illustrated, he lived the life and has paid a price for it. And so did many around him.

This public display of disregard for conventional mores, allied to his stirring songs and singing, made him an anti-hero for many. Arriving in the early 1980s on the wave of anger unleashed by British punk culture and fuelled by a reaction to underlying anti-Irish sentiment driven by the Troubles, The Pogues were portrayed as a force of apparently reckless abandon. They were everything button-down British feared in the Irish – wild, uncouth, foul-mouthed drinkers and carousers. And in MacGowan, his insolent smile proudly revealing a history of dental neglect, they had a face and a voice to remember.

The irony of course was that they could legitimately claim him as one of their own. Shane MacGowan was born in Kent. His parents, Maurice and Therese, were among the estimated 500,000 Irish who left the country in search of work and opportunity during the dismal 1950s. After his birth they returned to their native Tipperary for about six years before returning to Britain. There, their young son was raised deep in the songs and stories of the country he had left, his attachment nourished by frequent visits to Ireland. But he grew up in England and indeed gained a scholarship to Westminster School, a leading public school in London; he would be expelled after he was caught with cannabis.

Having a mixed identity can be problematic. We sometimes take belonging for granted. Children of emigrants, Irish and otherwise, always face a decision about who they are: do they identify with the land of their birth and where they were raised or do they cleave to the ancestral homeland, a lost idyll?

Morrissey, for example, was born into the same Irish emigrant generation as MacGowan but he identifies firmly – a little too firmly for most, with his stated admiration for Ukip – with Britain.

MacGowan’s parents, along with thousands of others, did not want to leave their home country and that sense of a generation betrayed, a generation lost, informs the best of MacGowan’s lyrics. Even the rowdy, bawdy ballads are tinged with a sense of desperation.

For instance, the spectre of emigration hangs over the ballad pastiche of the unbridled Sally MacLennane: “Jimmy” leaves for “God knows in the morning” to make “money far away”. And when he returns many years later his friends are gone as well. Typically MacGowan ends on what he considers a high note: “Some people they are scared to croak but Jimmy drank until he choked/ And he took the road for heaven in the morning.”

While it is fascinating how The Pogues took standard folk material such as Ewan MacColl’s Dirty Old Town or The Dubliners version of The Irish Rover and made it their own and, in the process, legitimised their claim to be a distinctive part of the Irish tradition, could a similar Irish-based band have done likewise?

It has often been argued that in many ways The Pogues took up where the Dubliners left off – and there is little doubt that MacGowan’s proud clear voice of his early years is redolent of Luke Kelly in his prime – but Ronnie Drew and co never carried the same menace or defiance nor were they ever considered subversive or outsiders. Nor did they have a songwriter like Shane MacGowan. The Pogues were punk balladeers, as conscious of The Clash as of The Chieftains, if not more so. And though they brought in Irish blood in the shape of two highly regarded musicians, the late Philip Chevron and Terry Woods, MacGowan remained the beating heart of the band, even as his demons and the pressures of the road mirrored the band’s decline.

Initially, their relationship with Ireland was riven with tension. They referenced the home country in song and story but official Ireland was not so sure this was a good thing, especially in the early days. The image of a ragged Shane MacGowan nursing a bottle while letting rip with a song was not one calculated to win approval. It spoke of a past that newly cosmopolitan Ireland wanted to leave as far behind as possible.

Yet the bitter beauty of MacGowan’s songs, many co-written with that good Englishman Jem Finer, such as The Old Main Drag, A Pair of Brown Eyes and the monumental Fairytale of New York, dignified the lost and lonely, whether they wandered the streets of London or New York or any other city where the Irish had mislaid their compass.

One summer evening drunk to hell

I stood there nearly lifeless

An old man in the corner sang

Where the water lilies grow

And on the jukebox Johnny sang

About a thing called love

And how would you bloody know?

– A Pair of Brown Eyes

It’s a vivid scene but one sketched compassionately. The jukebox calls him home as, while “drunk to hell”, the narrator navigates a grim world of solidarity one minute and anger the next. This is the world of the underpass, the cardboard cities where different rules and conventions are observed. It has particular references but a universal feel. There is a degree of sentimentality but it is always conditioned by hard reality.

The same could be said of Fairytale of New York. It was good to hear MacGowan credit Finer, the late Kirsty MacColl and producer Steve Lillywhite for their work on Fairytale during his recent RTÉ radio interview with Miriam O’Callaghan. It is a remarkable song and an even more remarkable performance on record. Both MacColl and MacGowan live the lyrics, they are immersed in character as time transports them from the reality of the drunk tank to the emigrant’s bright-eyed optimism to bitter recrimination and those telling lines when MacGowan sings: “I could have been someone” and she answers “well so could anyone”.

All those years later, after those countless plays on radio, the song retains its emotional heft, its power to make the listener pause and reflect. In many ways it is the perfect Christmas song, one that reminds us all of our vulnerability, of our humanity.

It is an argument that the best of MacGowan’s writing took place over two albums, Rum, Sodomy and the Lash and If I Should Fall From Grace with God (also the title of Sarah Share’s revealing documentary), and thereafter he fell foul of excess. Speaking of songs like Rainy Night in Soho, he told O’Callaghan that “they were easy to write . . . I haven’t written anything like that in years.”

Perhaps not, but his legacy is assured. So happy birthday Shane Patrick Lysaght MacGowan.

Amy Schumer has made a docuseries about her pregnancy, a body in revolt

Amy Schumer has made a docuseries about her pregnancy, a body in revolt
8

If the artist offends, should we pluck out their work?
9