Writing courses are a waste of time, writers need to be more economical, and disturbing books are a triumph – the British author is in typically combative form 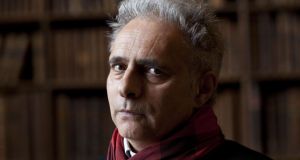 Hanif Kureishi: ‘You want to get more economical as you get older and get more work out quickly.’ Photograph: Getty Images

In Intimacy , Hanif Kureishi’s unflinching 1997 novel about infidelity, he wrote the following line: “There are some f***s for which a person would have their partner and children drown in a frozen sea.” It’s a catastrophic image, violent and narcissistic, and it captures brilliantly the obsessive quest for passion by the book’s protagonist. Kureishi has a gift for such one-liners, but he is quick to point out, as we sit in the west London office of his agent, that being an artist “is agony”.

“Writing is difficult. It has to be. It’s only fun if it’s difficult. I teach creative writing [at London’s Kingston University], and my students have no sense of what a marathon it is. It’s not like a film, where someone else can take over. With a novel you’re doing the whole damn thing yourself. It’s a lot of intellectual juice.”

Last weekend Kureishi told an audience at the Bath Literature Festival that creative-writing courses are a “waste of time”, and that “it’s probably 99.9 per cent who are not talented and the little bit that is left is talent”. It is a typically contrarian outburst, but revealing that “a lot of my students just can’t tell a story” might not impress his employers.

Kureishi was there to discuss The Last Word , his first novel since 2008’s Something To Tell You . In between, his Collected Stories appeared and there was a collaboration with his friend Roger Michell on the 2013 film Le Week-End . The new book focuses on a burgeoning working relationship between Harry, a young writer, and a famous older author whose biography he is writing. In the run-up to publication, there was speculation that the story mirrors that of VS Naipaul and his biographer Patrick French. Here, Kureishi bats away the question.

“I wanted to write a character who doesn’t give a f***. It’s such an attractive idea: if you woke up one day and didn’t care what other people thought. ‘What would I do if I was completely free from my own inhibitions or superego? How would my life be different?’ I love people like Francis Bacon, who didn’t give a s**t. I like the idea of writing about someone who is really difficult, someone who’s really a problem for others. I like difficult people. I’d like to be more difficult than I am now.”


A little gruff
Kureishi is not so much difficult as a little gruff, but he is happy to praise his own work. In the novel, Mamoon and Harry engage in conversational duels, examining the idea of memory, truth and public versus private personas. As a writer whose combined screenplay and theatre output runs to double figures, it’s no surprise The Last Word is such a talky book and that the dialogue is so good. It’s also funny – which, Kureishi points out, is just how he sees the world, even though he is not a writer most people reach for when they think of comic writing. His work has probed and poked recurring subjects that are hard to raise a laugh from: racism, familial conflict, emigration, being an outsider.

One of his biggest themes – and one that resurfaces the more Mamoon’s life is delved into – is infidelity. “It’s the most fascinating question of all,” says Kureishi. “If you’re faithful to someone, is it worth giving up all these other pleasures for? Do you stay in a relationship and become a masochist or do you f*** off and become a sadist? These questions are alive all the time, not only in terms of sexuality – they apply to education and to political commitment. What do you abdicate by becoming a Muslim fundamentalist, but also, what do you gain? Questions about fidelity are not just about who is f***ing who, but about what you’re gaining and giving up.”

In Intimacy , a man leaves his wife and family for another woman. The book was published after Kureishi had left his partner and two young sons. After the publication of a memoir about his father, Kureishi’s sister wrote an open letter to the Guardian claiming it was an unfair representation. Tellingly, a character in The Last Word , declares: “A writer is loved by strangers and hated by his family.”

Does he have regrets about some of what he’s written? “My only regrets are to do with quality, and I ask myself how I let that through. Why do you ask?”

Kureishi knows well what I’m getting at. I mention his sister and Intimacy , and point out that the book is almost unbearable to read. Kureishi seizes on this. “That’s why it’s such a good book and why it still has such an impact on people. It’s great to have written a book that people are still horrified by. The fact that it really bothers people is a triumph to me. In terms of the book about my father – what would I regret about that? Sometimes you have to say disturbing things. My kids say disturbing things to me all the time.”

We’re about to move on to race, and Kureishi has another thought. “Fatherhood definitely changes your attitude to sexuality, your relationship to the mother, to the sort of relationships you can then have with other women. Women feel worse and more guilty about this in relation to children. Children disturb everything about the balance of your life – in a good way, but in a disturbing way too.”

West London is home. He has three sons: the youngest is 15 and his twins are 20. He is proud that he has supported his family through writing. Several of his characters are men who run away from relationships, from pregnant girlfriends, and his female characters are often passive and put-upon.

He disagrees. “I don’t think Eva in The Buddha of Suburbia or DeeDee in The Black Album or Leanna in the new book are passive. I tend to tell stories from a male point of view, but I wouldn’t say that the women suffer more than the men, or suffer more because they’re women.”

‘Needy immigrant ’
Race is a benchmark of Kureishi’s fiction, and he roundly criticises media representation of immigrant experience as one of “the greedy, needy immigrant off the boat and running towards the nearest benefit office”. He adds that “the Tories are racists without being racist . . . who have transferred all the wealth to the rich”.

The 59-year-old says he found writing the latest novel hard. He’s working on a film, some essays and has plans to write more short stories. “The other day I was thinking that the one thing that I don’t want to do is write another novel, but then writers always say that. I had an idea for one, but a novel just feels like too much work. I can’t face the thought of pushing that f***ing stone up the hill again.

“You want to get more economical as you get older, and get more work out quickly. You start to wonder: why so much elaboration? My Beautiful Launderette and Le Week-End are both 90 minutes long, not three hours. The Last Word is the length it should be. Economy is one thing that all artists should develop as they get older. It’s a virtue in an artist.”

The Last Word is published by Faber & Faber

The North Water by Ian McGuire review: the elements of style
8 Welcome to the child sex capital of Europe
9