A round-up of the best nights out across the country 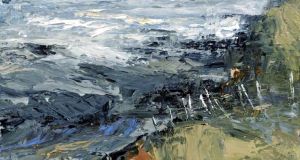 McKenna’s Fort
The New Theatre, Dublin. Previews Mar 21-22. Opens Mar 21-Apr 2 7.30pm €16/€12.50 thenewtheatre.com
With the centenary of the Rising it isn’t surprising that we should have so many opportunities to revisit the stories of many of its participants. It’s more revealing that, from our vantage, the stories that have been concealed, or only partly told, should become more compelling. With choreographer Fearghus O’Conchúir’s new dance work The Casement Project due to hit the stage later this year, first comes a new play by Arnold Thomas Fanning for Fire and Ice Theatre Company which draws from Roger Casement’s writings, including his letters and his infamous Black Diaries, to present the man in his own voice. He’s certainly one of Ireland’s more fascinatingly complicated Easter Rising figures: an international diplomat committed to exposing human-rights abuses in the Congo and Amazon, whose sexuality came under rigorous and censorious scrutiny, a British peer, and the last Irish rebel to be executed. Paul Kennedy directs Michael Bates in the role of Casement, a rebel with many causes.

RHA 186th Annual Exhibition
Royal Hibernian Academy, Dublin Mar 22-Jun 11 rhagallery.ie
The RHA’s home in Abbey Street fell victim to the bombardment of the north inner city during the 1916 Rising. The annual exhibition was on at the time and everything was lost. Marking the 100th anniversary, the academy is reverting to the 1916 timetable for its annual show, rather than the usual summer slot. Nearly 400 artists, close to 600 artworks (including Alice Maher’s Romance) – well worth a visit.

The 1975
3Arena, Dublin 8pm €35 ticketmaster.ie
This Manchester band has sneaked up on us, and so it seems that within a short space of time they are playing major venues. Truth is, The 1975 have been plugging away since 2002 but have only really made their mark from 2012 onwards. The band’s recent second album (I Like It When You Sleep . . . ) looks set to be a major success, so we don’t see them downsizing venues just yet.

Patrick Hennessy: De Profundis/The Passion According to Carol Rama
Irish Museum of Modern Art, Dublin (Hennessy Mar 24-Jun 24, Rama Until Aug 1) imma.ie
Irish artist Patrick Hennessy (1915-1980) was highly regarded for the virtuoso realism of his paintings, but apparently many of his admirers did not notice the current of desire that ran through his work. Hennessy was gay at a time when his sexual orientation meant social and legal persecution. This welcome survey show offers a chance of reassessment. Italian artist Carol Rama (1918-2015), meanwhile, whose work vividly explores female sensuality, desire and eroticism, was only belatedly recognised. Adult themes and some explicit imagery, IMMA cautions.

Natalie Merchant
Olympia Theatre, Dublin 8pm €34.50 (sold out) ticketmaster.ie
Although best known by some as the former lead singer of 10,000 Maniacs, Natalie Merchant has latterly consolidated her solo status with albums as diverse and potent as 2010’s Leave Your Sleep and last year’s Paradise Is There: The New Tigerlily Recordings. It says something about Merchant’s popularity in Ireland that this show sold out in jig time.