In September, Galway was where citizens could stumble on something wonderful 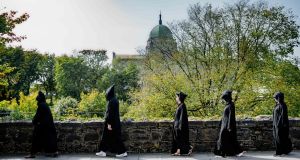 With live cultural experiences challenged – rare and wonderful – there was art to be found around corners in Galway this month, sometimes unexpectedly.

Galway International Arts Festival (GIAF) had to cancel its July festival because of Covid, but the team drew together an alternative, smaller programme running through September. Coinciding with the start of a revised and reduced Galway 2020 European Capital of Culture programme, it meant the city and surrounds became a place of occasional art to come across or carefully explore, as a gentle, varied experience in difficult times, and reminding us that life goes on.

Changing Room was a theatrical event – not live theatre but a live experience, and a moving one too. Playwright Enda Walsh’s most recent Room (in the series devised with GIAF director Paul Fahy) is very much of Galway, or more specifically Salthill, and also of the pandemic.

The Room each booking enters for separate sessions is recognisably one of Salthill prom’s changing rooms, with slatted benches, discarded flip-flops and high opening slits casting light. A swimmer tells his story, of family loss and a closeted and constrained sense of self and sexuality, with generous dashes of black humour (both his parents had angina; “it was literally the only thing they had in common”). Surprisingly, joyfully, this pandemic story has a happy and uplifting denouement.

Last Saturday, as other GIAF elements drew to a close, Walsh was again writer and director for a work-in-progress showing of Medicine, which Landmark Productions and the festival are co-producing for next year’s GIAF. In the vast Black Box, with mini-audience in pods of one and two, there was palpable excitement, underlined when Walsh’s brief welcome drew applause - for the fact of being there, live, and the promise of for the future.

The in-progress was well worked and in great shape; three actors, jazz drummer Sean Carpio, Walsh and the creative team had spent five days putting shape on his new play, about how we’ve treated “those we call mentally ill”. Domhnall Gleeson is an inpatient in some sort of drama therapy replaying trauma, facilitated by two actors called Mary (Clare Barrett and Aoife Duffin), one of many touches that add Walsh’s characteristic layer of black comedy to the bleakness. Layers too, in a work-in-progress, with actors playing actors, and occasional asides commenting on the script (“the language is a little inflated”). Roll on 2021, this is looking so good.

Cascando is a variation of a 1961 radio play by Samuel Beckett, which Pan Pan’s Gavin Quinn and Aedín Cosgrove (with sound design and music by Jimmy Eadie) have adapted to a live experience. The small audience dons black hooded cloaks and headphones and is led from the Rowing Club along the river through Nun’s Island, with Andrew Bennett and Daniel Reardon’s voices in our ears.

It’s an intimate experience, enveloped in sound and cloak, in your own world yet moving through the outside world. The ritualistic repetition of description and words, as the voice attempts to find the end of a story, or the end of all stories, or perhaps find the character Woburn, is reflected in the monkish costumes. There’s also a two-way thing going on, as the procession of robes threading through town creates its own mystery for onlookers.

The Festival Gallery was back in the same fantastic city centre space, a former telephone exchange behind the GPO, staking its claim again in a city still without and in need of a municipal gallery. When it was unveiled for GIAF 14 months ago, fadó fadó BC (before Covid), there was speculation and hope this part of the vast An Post-owned site – surely a space made for art – might become a long-overdue city gallery. Sadly, it’s still temporary, still put to terrific use in a great cultural spot for passing citizens – and still a prod to the city to make it happen.

A steady stream of visitors booked slots, and the cavernous space is beautifully suited to Hughie O’Donoghue’s Night Cargo, large paintings on repurposed tarpaulins, with metallic golds and bronzes, inspired by Murnau’s Nosferatu and meditating on the sea and Inis Oírr’s Plassey shipwreck. In a smaller space, Bill Viola’s Three Women is mesmeric: a fuzzy scene of mother and daughters coming towards us, then literally bathed in water to emerge clear and coloured and wondrous, only to retreat back to a netherworld.

A box on the landscape

Mirror Pavilion, in some ways emblematic of the September GIAF/Galway 2020 experience (it’s a joint project), is a box on the landscape. The gleaming mirrored cube, sitting on Claddagh Quay across from Spanish Arch all month, is polished and perfect, literally reflecting its environment but also startlingly alien. A constant stream of visitors watched the odd straw figures’ dance loop on a giant LED wall, and distorted reflections of Long Walk and the Claddagh on its other sides.

The is not video but virtual imagery created by John Gerrard, using gaming tech to programme multiple small screens, a process that sounds laborious and intricate (and expensive). It’s a spectacular, unusual landscape artwork, with another version heading to Connemara’s Derrigimlagh Bog later.

The autumn GIAF was a sort of placemarker for the festival proper – set to return next year – and it became a languorous month of events rather than the usual packed fortnight. It included two weekends of First Thought talks, with small live audiences, and now with a longer life accessible online. GIAF got going just as Galway 2020’s reimagined programme restarted, having been suspended by Covid as soon as it was out of the traps. The Capital of Culture “year” has been extended into March 2021, with projects reworked for pandemic circumstances. As well as Mirror Pavilion, its autumn projects include Druid Gregory, currently touring small Galway towns after a run at Coole Park, and Óró, a live promenade performance in Carraroe.

Macnas’s ambitious Gilgamesh, for Galway 2020, was to be a four-pronged project spread through the year, about “the world’s first-ever hero’s journey”. Following young king Gilgamesh on a quest for answers to fundamental questions about love, power, death and immortality, the project has morphed to avoid large gatherings. Macnas is releasing three mini-films online as a story teaser and character introduction.

The first short, unannounced pop-up live performance took Uta (a dirty-gowned Midie Corcoran in need of a good wash and shave) for a walk on the prom in Salthill. Doomed to eternal life, he painfully drags a giant music barrel contraption, endlessly playing Happy Birthday (ref: eternal life), to the bemusement and quizzical looks of beachside walkers.

Artistic director Noeline Kavanagh’s first atmospheric, evocative two-minute video is on macnas.com – scroll well down – and YouTube channel, featuring Enil, father of the gods and Gilgamesh’s enemy. Working with playwright Marina Carr, it builds to an outdoor free event in rural Galway on December 6th, and an indoor show in March.

A Galway 2020 project that citizens will have more chance of happening upon accidentally is Hope It Rains. A trail of installations around the city and in Salthill visualises Galway inundated, where “yet another abnormal has become commonplace”. Joe Lee’s photomontages – some dramatic, others more gentle – see familiar Galway views changed by rising sea levels and floods.

Curator Ríonach Ní Néill leads guided tours, and is making an audio map for self-guided tours of the sites in case of increasing restrictions. Another of the Hope It Rains project, Grain Loves Rain by Ukrainian artists Proso, literally sowed seeds for a wearable poncho of baby greens. A video, at the Galway 2020 offices in the Cornstore, follows a young woman wearing sprouts, a bit of nature for a rainy climate, as she walks around Aran.

The Aran s shots echo Hughie O’Donoghue’s glorious Plassey paintings in GIAF, and other Galway 2020 projects: Aerial/Sparks audio art trail on Inis Oírr and Monument. The new Galway Museum exhibition links the county with its European context by drawing connections between big stone monuments on small islands. Focusing on Aran’s forts and monuments on some of Europe’s smallest islands, a large map by Maeve Clancy turns Europe on its side, Aran Islands at the apex, allowing European islands an intriguing relationship with land and sea.

Monument draws in elements of archaeology, architecture, craft, cultural landscapes, tangible and intangible heritage and social history, primarily focusing on Aran’s forts, particular Dún Aonghasa, over a long period from Late Bronze Age 1000 BC into early Middle Ages. It displays National Museum artefacts heretofore in storage, such as Bronze Age cooking pots, tweezers, amber beads from a necklace (and moulds for them), an early medieval comb for grooming and delousing, bone pins and needles for making clothes and stone tools.

Curators Galway City Museum director Eithne Verling and Sybil Curley commissioned craftworks inspired by the island, ranging from textile artists Áine and Tarlach de Blácam to basket-maker Joe Hogan, to Colm Hogan’s glorious panoramic film of the islands at the edge of the Atlantic, with drone swoops that are exhilarating and moving.

The film reflects the strong sense of the west of Ireland that permeated both the GIAF autumn programme, and the restarted Galway 2020, as well as a defiance and a brave statement of intent by art-makers in face of the limitations of turbulent times.