A delirious, madcap tone make this 2D puzzler a good game to play with younger relatives – and they’ll love the fart jokes 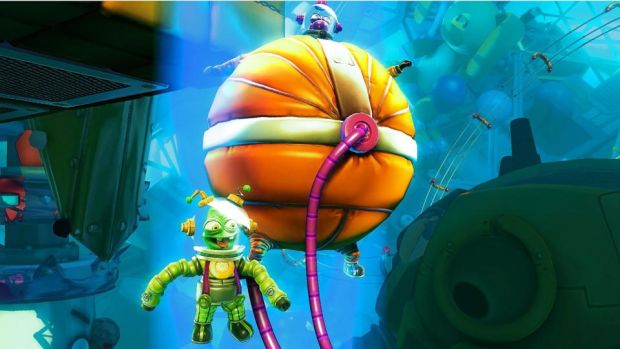 A fart is a major plot point in Shiftlings, a clever and zany puzzle platformer. You play a pair of unlucky aliens tethered together in spacesuits, one of which is permanently inflated due to an accident involving the fizziest drink in the universe.

As luck would have it, these “zorks” are taking part in an intergalactic game show, and having one spacesuit filled with gas comes in handy sometimes.

Shiftlings is a 2D platform puzzler, best enjoyed as a two-player co-op experience. You have to negotiate a hostile environment in each level, with its share of switches, lifts, buttons and automated traps. And you have two locations to find – one spot to turn on the teleporting machine, and a departure point at the machine itself.


One spacesuit has to remain inflated at all times but you can alternate who has the gas-filled suit. Each condition has its advantages; a gas filled suit can work as a trampoline, while a slimmer suit can reach some obscure switches and buttons. It’s a challenging, frequently satisfying game.

Shiftlings has its own voice, though that voice can be a little shrill. There’s a delirious, madcap tone and searing bright colours. The graphics are cartoonish and busy and the slapstick violence is reminiscent of Loony Toons. It’s narrated by an outspoken alien host, who wavers from grating to amusing.

With logical puzzles, a weird setting and neat use of co-op, Shiftlings might be a good game to play with younger relatives. If nothing else, it’s probably the cleverest game to use flatulence as a plot point.