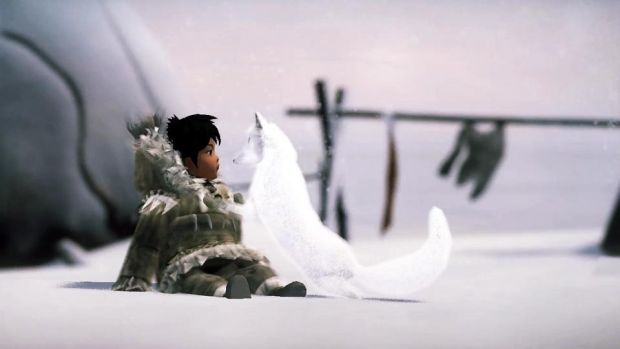 Hostile environments are a paradox. When we see footage of, say golden, undulating deserts or shimmering white Arctic conditions, we’re intimidated by nature’s power but also drawn to its splendour. Storytellers, and especially modern game developers, appreciate this duality – and games such as Never Alone capture both the horror and the majesty of the natural world.

You play two characters, Nuna, a young Inuit girl and an Arctic fox who she befriends. The story follows Nuna as she sets out to find the source of a seemingly endless blizzard.

Never Alone is a 2D, mostly side-scrolling game, and Nuna and her fox work co-operatively. You can play either single-player, alternating control of the two adventurers, or in two-player collaboration.

As with last year’s excellent Brothers, each playable character has its own strengths; Nuna can use objects and weapons, but the fox is more agile and can slip into hard-to-reach places. He can also talk to “spirit helpers” – cloud-like beings from another dimension who act as guardian angels.

It’s an exquisite game, with the white smatterings of snow ever-present against the hard, remorseless ice. There are so many lovely details, like the shelves of ice above and below that move up and down like chomping molars.

Both Nuna and the fox are wonderfully animated, expressing so many emotions with their body language – excitement, affection, trepidation and sadness. Just like any other game, you resurrect after dying, but more than most games, the deaths are emotionally devastating. Not only do you have to watch your beloved character pass away, but you also have to see how the surviving one reacts: Nuna screams “No!” when the fox is drowned or crushed, and the fox curls up in quiet grief whenever Nuna dies.

Never Alone has aspirations beyond that of a digital distraction: It’s also an enlightening document about Inuit culture. The game is based on an old myth (Never Alone translates to “Kisima Innitchuna”), and the voiceover is in the Inuit language. What’s more, moments in the game unlock educational videos about their way of life.

Like Journey and Limbo, Never Alone has a gentle pace, and its protagonists are vulnerable and loveable. It’s a sometimes dark story (as many fables are), but it’s also an enchanting, challenging and utterly sincere tribute to the Inuit people and to the immense power of nature.