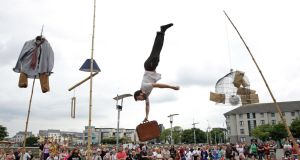 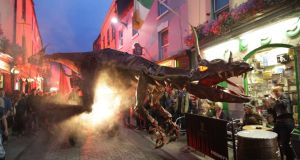 An angry dragon roaming through High Street during Galway Arts Festival. Dragons was presented by one of Europe’s most exciting outdoor theatre companies, the world famous Sarruga from Barcelona. Photograph: Joe O’Shaughnessy 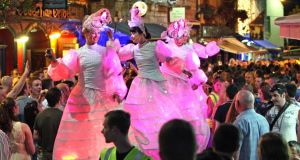 Stilt walking Members of The Wrong Size performing their Lightwalkers show on the streets of Galway as part of Galway Arts Festival. Photograph: Joe O’Shaughnessy

Saturday was one of the heatwave barnstormers we have come to expect from July 2013. Yesterday morning came up muggy and cloudy. But if there were fears that the first Galway Arts Festival in almost a decade without a climactic Macnas parade might fall somewhat flat, they were dispelled on Saturday afternoon.

Street theatre
As the sun beamed down, the city centre filled with people who had come to “ooh” and “ahh” their way through a programme of free street theatre events. There were Nigerian families, Chinese tourists and American teenagers as well as local families with buggies.

They came in their thousands – one estimate put the audience figure in Eyre Square on Saturday afternoon at 7,000 – to applaud the trapeze artists and cheer on the trampolinist.

By 10pm it was still balmy in the city and the square was still crammed with people waiting patiently to see “the ballerina in the balloon”, aka The Dream Engine Heliosphere. As the giant helium-filled balloon floated serenely into the sky and the silvery figure in the harness twirled and spun, creating beautiful silhouettes against the silvery moon which was rising over the sea to the west, the effect was mesmerising.

Every so often the aerialist drifted down to Earth, to be greeted by a forest of waving hands as toddlers on their parents’ shoulders stretched up to try to reach her.

Well, most people were mesmerised. “Boring,” muttered one dissenting voice nearby.

The verdict of the festival’s chief executive, John Crumlish, was more positive. “Crowd numbers have way exceeded our expectations,” he said. “We have rarely concentrated so much on one weekend, but this year we had our new street programme and the First Thought series of talks, which covered a range of topics from the diaspora to creativity in public spaces. And it seemed to work.”

Virtuoso display
Yesterday’s grey skies didn’t dampen the enthusiasm of the more than 1,300 who gathered at Spanish Arch to watch the final performance of Any Day by Catalan trampoline artist Max Calaf Seve. He began with traditional tramp props – a battered suitcase and heavy coat – and progressed to a virtuoso acrobatic display that included trying to drink water from a plastic pint glass in mid-bounce, with delightfully splashy results.

Back on Eyre Square the French trapeze outfit Les Pepones attracted gasps, laughs and a standing ovation for the final performance of their high-flying show, inspired by the silent movies of Buster Keaton and Charlie Chaplin.

It takes a lot to impress a city where, on any Saturday night of the year, you are likely to meet a gang of young fellas dressed as Superman walking along the street on their way to or from a stag party. But this weekend’s spectacles left Galway well and truly wowed.